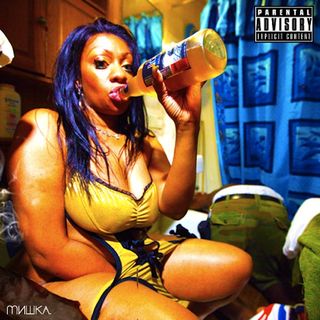 There’s enough familiar territory covered at the start of Lost in Translation that one might be forgiven for assuming this mixtape is something already heard. Mr. Muthafuckin’ eXquire comes hard out of the traps with the kind of menacing, alcohol-drenched bangers the album’s artwork alone primes the listener for. Which isn’t to say that “Triple F” (revealed to stand for “fuck ‘em, fuck ‘em, and fuck ‘em”) and “Huzzah!” are bad at all; “Huzzah!” especially boasts the ferocious ignorance of any convincing ego-rap. But as he reels off lines like “your pussy’s so good my whole squad should enjoy it” with a gleeful intonation, the delivery is simultaneously amusing and disconcerting; it’s the inappropriate joke that silences the room at a party, only here the jester feels no inclination to wait for applause—he’s already clapping.

Which is why, if the rest of Lost in Translation continued in exactly the same vein as its opening tracks, I’d have few qualms about writing this off as fun for a couple of spins and not much else. But this isn’t that kind of mixtape. Mr. Muthafuckin’ eXquire, backed by production from (amongst others) El-P and Necro, comes at his audience from all angles: vitriolic rhyme spitting; remorseful contemplation; Harold & Kumar gags. Thankfully, there are enough doses of humility and sought-after atonement present to make this a richly compelling document at almost every turn.

Considering his implied contempt for female parental figures, eXquire goes to comparatively remarkable lengths to display due care and affection to his own. On a mission for a late night snack in “I Should Be Sleepin’,” he “twists the doorknob slow, so she don’t hear the clickin’,” and later acknowledges her greater maternal wisdom (“Yeah she right, I should be sleepin’”). Also, on “Weight of Water,” eXquire asserts that “I’m just a regular nigga / Despite what y’ll say”—unable to decide whether he’s running the back streets of NYC or trying to live out a quiet existence dictated by the requirements of satisfying those he cares for. “What d’ya want me to do?”, he asks resignedly, soul-searching as much as it is outwardly directed. Lost in Translation‘s range of themes—both the objectionable shit you’d expect after visiting his wildly NSFW Tumblr, and the wealth of confusion that surrounds it—is not so much paradox as plain uncertainty, the listener none the wiser as to what defines eXquire, yet content to revel in his successfully shifting style.

Ballad “Nuthin’ Even Matters (Regrets)” is another example of such variety, telegraphing its intentions but absolving itself from the charge of predictability with its killer delivery. eXquire handles the chorus hook himself, and does a fine job, but what makes the song so good is how he goes on to describe his favourite Jimmy Neutron episode during a state of crushing depression, and reels off a catalogue of things that “maybe [he] shouldn’t‘ve” done, including dropping out of tenth grade, opting not to go to college, quitting his “good-ass” job, and swallowing an excess of sleeping pills. eXquire’s asides focus on the very minutiae of his existence: we are told of his stop on the C Train from Euclid (Utica) in “Pissin’ Between Train Cars,” and of his typical chicken order in “Chicken Spot Rock” (three pieces, french fries). His world is a world he demands that the listener inhabit, whatever form it comes in.

This is an eighteen-track mixtape, so excess is sorta inevitable. Skits “Hip Hop Networking 101” and “YeahRight!.com” are questionable inclusions, given that their sentiments regarding the music industry are more acutely described elsewhere, and “Lovesponge” is a dire track about being used that drags out disproportionately to its two minute runtime. But Lost in Translation‘s ability to chop and change its course successfully throughout its duration is impressive, and never becomes tiresome. The carelessly misspelled “Lou Ferigno’s Mad” is a memorable, thumping track which harnesses the same energy in classic rock sampling Fashawn drew from earlier this year with “Manny Pacquiao,” and abruptly ends with Mr. eXquire declaring that “I could’ve added more bars, but I just gave up.” It would be difficult to suggest that he’s lying.

The final track, included as a bonus on this release, is the much lauded remix “The Last Huzzah!”, overflowing with guest spots and arguably composed of the freshest mix of flows a posse cut has possessed thus far this year. Included is Das Racist dropping the type of self-aware, soundbite-friendly lines inexplicably absent from the recent Relax (2011), including Heems anointing himself “Worst rapper on the track / Third coolest.” With Danny Brown’s volatile, high-pitched roaring and El-P’s hardened, stylised enunciation both honed to perfection, eXquire steps in and delivers the final stanza himself, effortlessly assured in the sort of way he has no right to be, yet cannot be begrudged for.

Sure, his flow is reminiscent of Method Man, and at present he’s mostly rapping over recycled beats (one of the odder examples: jacking Cannibal Ox’s “Pigeon” for a track called “Build-A-Bitch”), but ultimately eXquire is not at all that far from being the finished article. Whatever impression you might get from its opening tracks, Lost in Translation is a solid and sprawling mixtape, with different aspects of eXquire’s personality laid bare, dissected, and even sometimes understated for the benefit of his audience—the potential fulfillment of this diversity the unspoken promise.