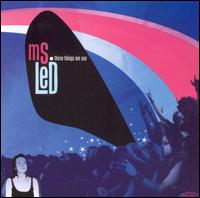 These Things We Say

But right now I’m listening to music (Ms. Led’s These Things We Say) and it’s pissing me off. I’m not pissed off in that adrenal Black Flag type of way, and I’m certainly not pissed off in that indignant Fear of a Black Planet liberal-guilt way that Ms. Led wants me to be. Right now I’m pissed off the way I feel after I lose a new pack of gum, or the way I feel when someone won’t stop poking me in the side. Let me be blunt: this album is hurting me.

Ms. Led plays pseudo-feminist punk rock that wants vehemently to be a modern update of the Bikini Kill riot-grrrl aesthetic. (I feel like a loser even typing that “grrrl” cliché, but I suppose in this context it’s apt.) What they play instead is over-produced, horrifyingly obvious sub-Donnas riff rock with painstakingly dumbed-down lyrics (ex: “We say things they won’t play on the radio!”). People shout “Hey!” during the choruses a lot, and when things get boring, don’t worry, there’s some Elastica-style harmonizing on the bridges. Almost every song features a break down replete with drum roll, whispered vocals and a positively propulsive segue into a guitar solo. (That was sarcasm.)

“And Now We Know” is a Living End rip-off, “Keep On the Outside” is a laughable robo-synth suck-factory, and “Small Change” is the least effective call-to-arms this side of the Vote for Change tour. (Sorry, Boss). “Gone.” (yes, the period is included in the title of the song) is probably the best track here, but don’t go downloading it, because it’s pretty awful, too. These Things We Say is jam-packed with melodies, bridges, interludes, etc., but The Futureheads it ain’t. Trying to hum one of these songs while washing dishes at work would probably get you smacked in the face by a coworker. There’s a lot of rollicking and wailing, but in the end there’s nothing here. “Your lyrics mean nothing” they sing with a sassy sneer on “Keep On The Outside," and, well, I guess the joke here is pretty obvious.

Why am I skewering this album, you ask? Because critics all over are reprehensibly buying into this shit. While Ms. Led’s politics are admirable, they’re utterly undermined by the synthetic, tacked-on approach with which Ms. Led presents them. This album wants to be something more desperately than William Hung. They want to be all “Cry havoc, and let slip the dogs of war”, but all I’m hearing is “Who Let the Dawgs Out." These Things We Say is the sound of the lowest common denominator. It would be inoffensive if its politics and admirers weren’t so outright insulting, but its politics are Sparknoted, and its admirers are wrong.