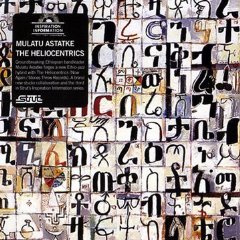 Is it shameful to say that I’ve never listened to a full Mulatu Astatke record? That I’m largely unfamiliar with the Heliocentrics? Or that the greater portion of my knowledge entering into this review consists of a making-of-album vid that I streamed off the Internet? The beauty of Inspiration Information 3 is that it convinces me that my critical foible barely matters—that meaningful information is bound up inextricably with inspiration. And, God, do I find this record inspiring. Ethiopian jazz legend revisiting himself, London-based Stones Throw sessionaires getting their hero’s help in interpreting their hero’s legacy, etcetera, etcetera…what you need to know is what I can’t really tell you, what I can’t just “know” myself.

It’s thus that opener “Masenqo” hits not too unlike the way Art Ensemble of Chicago’s “Theme de Yoyo” hit me a few years back and I asked Mark what it was, knowing full well that his answer had nothing to do with how much I instantly loved it, that the answer could’ve been “Kenny G with Joss Stone” and nothing would stop that track from becoming—in the mere span of a first listen—one of my absolute favorites. Of course, “Masenqo” isn’t quite in that stratosphere but the little thrills of its vibe are undeniable. The titular Ethiopian instrument (which whines like a pinched theremin) and a vocal line parroted by a stringed scrawl compose a trifecta of softly surging high pitches I imagine have something to do with Ethiopia at the same time that—in the midst of such an assumption—they illustrate Ethiopia or at least Astatke’s art and the tradition his music springs from in a way that is tactile, present, related not like history but like an outburst of feeling. It would not have this immediate impact were it not defiled with outside influence, miscegenated with the Heliocentrics’ clipped riffs and gizmo production and sizzling breakbeat. Is that irony? I don’t know how to classify it except with a qualitative “shit’s hot.” Maybe Ethiopians call it “selling out.” But to these Western ears it sounds as beautifully natural as new birth.

I mean, seriously: hip-hop head that I am, “Chinese New Year” makes me want to call this music “trill.” It is the very definition. But what’s this trill sound like exactly? “Melancholic modal musings and thunderous funk,” says the record’s press release. Well, there you go. That’ll do. I feel like I’m listening to great modern beats and great old jazz in a miraculous simulacrum where those two entities are somehow the same thing and not watered-down versions meant to accommodate each other, giving the postmodern in music a vibrant, vital example. Here’s trivia: “This album features select covers from Astatke’s landmark 1970s albums and 45s released on the Ethiopian Amha imprint and later compiled on the Ethiopiques series and original songs written by the Heliocentrics and arranged by Astatke.” That description just means that this thing reeks of inspiration. New forms are determined by the old forms just as the old forms are reshaped; the way Astatke and the Heliocentrics process through this evolution is fucking biological, it’s so organic. Closer “Anglo Ethio Suite” makes its distinction of hybridity thoughtlessly enough that it might as well be called “Music,” so fluently and passionately do its rumbling bass drum and toms, its shivering pianos, its whinnying horse hairs, its whistling woodwinds, and the blindly reverent plucks of a begena speak, “music, music, music, music…”

If anyone’s waiting for me to break down some more tracks, well, all the tracks are really good, I’ll say that. To do much more is just piling on useless information when inspiration’s at the level at which your eardrums rattle and hum with it. It can be helpful to review most albums because most albums, seeking to forge a certain channel of communication, are made minding how they might be taken, a big part of the critic’s job then to navigate around traps and blankets wittingly or unwittingly set by the artist and the surrounding zeitgeist in order to get at some truth or insight otherwise obscured (this is fun to do with rap and pop but not Destroyer). The only help this review, however, could possibly give a reader is to get them to listen to Inspiration Information 3 and to get them to understand that Inspiration Information 3 doesn’t care who you are or how you approach it or that you don’t really know who the hell Mulatu Astatke is. It just needs to share its inspiration, its affecting story of nothing, just wants you to sway and bend and air drum to its ineffable grooves. I don’t think it even cares whether you’re on drugs or not. And so the truth is as this record is: that inspiration is not known but felt, that its speech is breath and its words actions, that it lasts only a moment but that moment is reincarnated throughout time. I wanna go pluck the shit out of a begena.