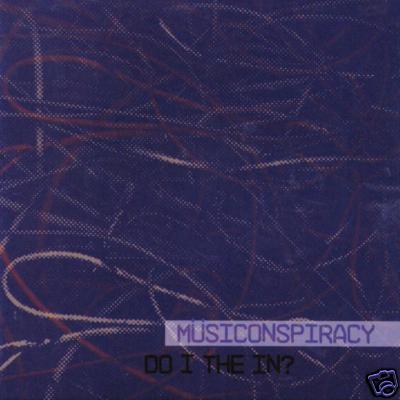 I have to say, that name is just fucking terrible, but ok, let’s go with it. If conspiracies are about the stories that lie in between the officially, universally acknowledged explanations for phenomena, consider Musiconspiracy to be what lingers between the notes—at least as far as Western music is concerned.

So, time to geek about trumpets again. Franz Hautzinger plays the quarter tone trumpet, a four valve operation pioneered by Don Ellis that can play microtonal scales. He’s joined by Tellef Øgrim on fretless guitar who, likewise, isn’t restricted by half-tone intervals; Joe Fonda on bass, who bends notes to oblivion; and Jacek Kochan on drums and laptop, who pretty much doesn’t have to worry about notes at all. The metaphor of the day is decidedly “liquid”: Do I the In? is a soupy mix that refracts On the Corner (1972)-era Miles Davis through the lenses of both high-energy free jazz and almost subconscious levels of incidental ambient music. Sometimes it trickles, sometimes it flows like Niagara Falls, occasionally both in the same track. It’s all pretty incredible.

It’s interesting to hear musicians flirt with these kinds of scales without ever really sounding like Eastern music, or even, on the other end of the spectrum, like the algorithmic experiments of 20th century composers like Iannis Xenakis. The album was recorded live in Cracow, and the band seem too interested in counterpoint and exploration to veer into specific genres or compositional coherence. The ideas of narrative and consistency are rather delicately undermined, which is to say poked and prodded but not completely ripped apart. In some ways that makes Do I the In? even more difficult to listen to at first. Abstraction often creates an identifiable layer of mood, even if that mood is foreboding and hostile (see most of the Rune Grammofon catalogue), but Musiconspiracy are too rhythmic, creating a momentum that’s at odds with itself. They are to electronic/fusion/improv what the Pop Group were to post-punk, creating crude caricatures of groove or melody. If there’s a mood here, it’s one of uneasiness, as if we’re only hearing the tip of some musical iceberg. Which, hey, conspiracy!

Still, the elements are there, even of traditional jazz, they’re just thrown into a blender. “Feed the Hamster” starts out unconventional enough with elastic guitar/bass slides and pops and Hautzinger’s barely audible squeaks. But then the rapid walking bass and crash-cymbal heavy beat kicks in—suddenly it could be Paul Chambers and Jimmy Cobb on Kind of Blue (1959). Except that the beat’s so fast it’s almost frantic and the trumpet overtop is so heavily reverbed it creates haunting impressions of itself all over the place, and the guitar is playing some kind of weird bowed variation on an old hymn…and besides, what kind of hard bop song starts that way anyways?

On the other end of the spectrum is a track like “Ectoplasmatics.” On the surface it’s nine minutes of the rising tension before a free jazz freak-out without the freak-out. But like AMM, Musiconspiracy revel in understated, minimal improv, where you’re forced to pay attention to minute details rather than the expected payoff. It’s also where the band plays subtly with electronics, though it’s hard to tell what’s what considering how manipulated the guitar and trumpet often are. What they do manage is a laptop presence that never cuts into the improvisational edge of the musicians, a glitchy interlude that pops with as much physicality as the scraping of strings and cymbals alongside it. Which is nothing compared to “Before or After?”—some kind of near-masterpiece of liminality. Not the liminality of pure tones like Keith Fullerton Whitman but the liminality of how far away from an explosion can you be and still hear it? Like pure energy potential, and that’s not even remotely a joke about the infancy of the band or the recording’s seemingly (at least to a non-European) left-field origins.

But then there’s that undeniable contradiction, the fact that “Summer is Far” is still red-hot heroin funk or that “Famous Disappearing Act” is still an icy slab of acid-jazz. That “For Mingus” has bass solos that aren’t entirely unlike what you’d expect with a title like that. That Øgrim’s guitar on “Choose the Mud” is woozy in a less than sober way, at least when it’s not erecting pillars of Nels Cline-like reverence.

And I’m not entirely sure I have an answer for the inevitable question of how they tie it all in. In some ways these radically divergent approaches just seem to co-exist without commenting on each other. These guys are, as one track puts it, “restless apples” (which I assume is in contrast to, say, a “bad apple”). But there are at least a few suggestions that the band thinks horizontally and vertically at the same time: opener “Song for My Mother” has Fonda firing on all cylinders while Hautzinger plays soft, sometimes even lyrical phrases, which carry the whole track into a drone-y finish. The track is a wall of beats surrounding delicate microtonal explorations. “Golden Angel,” too, which finds a remarkable amount of space even as it builds to a climax.

It’s almost as if pace or mood were a non-issue here, with the band interested solely in pure rhythm and counterpoint, pure sound, making any emotional descriptors irrelevant. Come to think of it, maybe their name is apt: like an overwrought conspiracy, you find yourself putting together incongruent elements until it’s forced into a grandiloquent narrative. Unconvincing, unrealistic, irresponsible even? Maybe, but what a hell of a story.