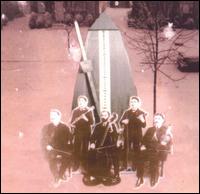 Music Tapes For Clouds And Tornados

In Julian Koster’s private universe, revealed to us slowly with his Music Tapes project, there are sweetly harmonizing singing saws, reindeer, ice palaces, and clouds—lots of them. Happy ones, sad ones, nimbus, stratus, you name it. It looks something like a Guy Maddin movie, silent movie images subtly brought to the present—relevant but with all their eerie qualities fully intact. To bring your inner life out, you need the right sounds to realize it, and our hero’s definitive imaginations are baptized in artful, unobtrusive tape hiss, accompanied on banjo, accordion and piano, emotionally pushed over the edge by Koster’s soulful, childlike voice. It is the utterly convincing intensity of his cracking, soaring vocals that sells the album, a watermark of sorts giving proof that this is real, this is the truest manifestation of his inner life that he can offer. You might be able to tell what another band’s interior life might look like, but on a Music Tapes album you are wholly inside, wonderfully lost in it.

If Of Montreal’s Kevin Barnes (who coincidentally goes way back with Julian and appears on this album) represents one end of the spectrum of transgressively personal indie rock, Koster’s music represents the exact opposite. Unlike Of Montreal, the Music Tapes exist in a nostalgically sexless world of childhood imagination, a tender world of ancient instruments and simple fixations. What makes both so vital is how the music they are making is so clearly and evidently believed in by their creators—there was a need to make this music, a need you can hear in every track.

In many ways Music Tapes resembles Neutral Milk Hotel—the Brian Dewan old-timey artwork, the enigmatic lyrics and aura, the impassioned, offputting vocals—which follows since Koster was once a member. The best songs on Music Tapes For Clouds And Tornados feature just Julian and banjo, like the epic, shiver-inducing “Song For Oceans Falling,” or full-band rockers like “The Minister of Longitude,” strengths which resemble Jeff Mangum’s. But the Music Tapes are also definitively their own beast, and all the better for it. Koster’s peculiar angle is his belief in whimsy and innocence, which he plays so hard that it turns tragic and as deeply felt as anything on In The Aeroplane Over The Sea.