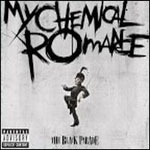 Welcome to the Black Parade

I’ve read in a few different places that My Chemical Romance singer Gerard Way penned his first grandiose fire and brimstone ballads in the days after 9/11. It would be mean-spirited of me to point out that if more people had sought to lend meaning to the tragedy of that day in the same manner as Gerard Way -- by becoming obsessed with tragedy in general -- then America might still be hiding under her collective bed instead of buckling up her ass stompin’ boots, so I won’t. I won’t because I’m not mean-spirited and because this is not my point. Well, okay, it kind of is.

My point is actually that the impetus for My Chemical Romance evinces a belief of mine about the band: it comes from a place of legitimate feeling on the part of its founder. The whole post-goth, verge-of-tears tableau so painstakingly maintained from their wardrobe to the font in their liner notes is, at least in part, independent of marketing guile. I feel certain of this. I feel just as certain, however, that this honest emotional touchstone gives MCR’s artistic execution all of the subtlety and texture of a refrigerator box. When Conor Oberst wanted to make a post-9/11 album he wrote one filled with overtones of uncertainty and disenchantment. Gerard Way just names a song “Disenchanted.” Oberst and Way are filling their fountain pens with the same bleeding heart; the difference is the complexity of what comes out when they put those pens to paper.

The band’s newest effort The Black Parade is proof positive of the above assertion. Way is of the widely held belief that sonic size is the straightest path to emotional force. This is the emo equivalent to the somewhat outmoded musical axiom that insists that rock music must be loud. (This paradigm finds utterance in the very name of the genre: screamo.) To be sure, it is larger in musical scope than 2004’s Three Cheers for Sweet Revenge: the title track opens with only a piano and Way’s recounting of a childhood memory, then builds to a march, before falling ass backwards into an obligatory neo-punk hop, and surging to a close with a defiant chant: “Until I die / You’ll never take me / You can try / You’ll never take my heart.” These are terse and ill-defined protests, and the unsettling implication here is that these screams might be all the more raw because they are trite.

CMG: Who is the “you” that you’re referring to in the chant in “Welcome to the Black Parade”?

Late-album highlight “Sleep” also begins with a lonesome piano, but later departs from the punk standard in favor of a more alternative rock sound; think Our Lady Peace if Raine Maida suddenly became hyper-morbid and self-obsessed. Yet here again, Way undermines the varied musical influence by relating a bout of intense but ultimately nondescript separation anxiety. These songs contain all the accoutrements of anguish and despair: he sings the words, he screams the words. So why does it all sound so fake?

This question becomes even more compelling if you accept my premise that, in large part, it isn’t fake. It is unfortunate that this concept album will likely draw cynical fire as a result of comparisons to Green Day’s career revitalizing American Idiot, but, again, I don’t see this as a derivative scheme to move units. I think that Way believed that this would be the best structure for his message. I mean, what does musical expansion honestly get him with his fan base? It probably drops him a couple of spots on the TRL countdown because the kids can’t dance to it (as easily). What benefit does a metaphor extended over an album serve a band known principally by its singles? The answer is very little, if any. An out-of-hand dismissal of this album as solely commercially motivated is off the mark. If anything, that theory points the other way, toward another series of individually packaged hits, dark but up-tempo and filled with hooks. As I listen to The Black Parade I still feel twinges of annoyance, but I feel something else as well, something entirely unexpected.

I find myself wondering if I can describe the physical dimensions of MCR music. What would it look and feel like if it were a thing? My first inclination is obviously to compare it to smoke; mildly foreboding but ultimately harmless unless consumed in large doses, then noxious. This would be a fatuous comparison though, meant only to gratify my personal animosity toward such necrophiliacs pawing dumbly at the long dead corpse of my beloved Diary (1994). This music isn’t empty like smoke, because emptiness, unlike hollowness, is genuinely large and hard to conjure. No, in my tactile analogy The Black Parade is hollow without being empty; it is hard but not dense; it is decidedly palpable but thin. If you were to lower a shoulder and run at it full speed, you might be nicked as you shattered through it (a catchy hook here, a clever turn of phrase there), but it would not reduce you to ribbons as would the razor wire of The Sunset Tree (2005), nor would your footfalls be slowed by the mire of earnest woe in Either/Or (1997). You would emerge on the other side unscathed and, I don’t know, go get a smoothie or something.

This is sometimes a very good thing. There are certain records that are supposed to slide off your back, their only objective is to feel good while doing it. Hell, there are certain records that are supposed to make you feel like having a smoothie -- I personally can’t listen to Weezer’s Green Album (2001) without craving frozen refreshment of some description. MCR knows this as well as anybody. Their feel-bad hit of last summer, “Helena,” was a contagiously inconsequential little number that I hummed for months. But this isn’t the modest payoff that Way is aiming at. Gerard Way wants to blow your fucking mind. And, in a way, this is sad, because instead of searching out the tragedy in quotidian moments he feels like he has to write a concept-by-numbers album to manufacture all the drama that his sagging, slender, raven-clad shoulders can support. This songwriting technique is not only pointlessly laborious but self-defeating because everyday life is the ground from which we cannot keep tragedy from springing. Without that ground words like “despair” and “heartbreak” and “hate-fanged succubus” are just words. So when you look behind these garishly rendered, faux-macabre set pieces you’ll see Way with his face paint running as he sweats and strains at the lines that move them around the stage. These are honest ambitions he’s attempting to execute, this is a big black mural that he’s trying to finger paint, and that right there is at least as heart rending as anything in a My Chemical Romance song.

Somebody get this motherfucker a smoothie.