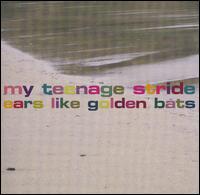 Led by singer/multi-instrumentalist Jedediah Smith, Brooklyn’s My Teenage Stride have both sides of the guilty pleasure equation covered. On the guilty side, Smith’s project is proudly and unabashedly retro, a tricked-out time capsule straight to an ‘80s heyday when indie labels like Factory, Flying Nun, Postcard, Creation, and Sarah soundtracked a thousand bedroom daydreams and John Hughes threatened to make Flesh For Lulu a household name. If you’re in the market for boundary-shattering innovation, you can stop reading now and go back to decoding the latest transmissions from El-P or Scott Walker. But if you get all slushy for the wild and innocent days of yore, driving around with a mixtape and a mild case of suburban teen angst, Ears Like Golden Bats will be comfortable and familiar to you.

It’s too easy to play spot-the-influence with this record, so let's just get that out of the way: “Chock’s Rally” sounds like an outtake from New Order’s first album; “Heartless And Cruel” does a fair job distilling the regret and disappointment of early Smiths; “Ruin” is a tear-jerker a la The Jesus and Mary Chain circa Darklands (1987); the title track channels the casio-twee of US indie darlings Poundsign, and various other songs dust off the breezy pop uplift of New Zealanders like The Chills and The Clean. Amid this tangle of references, the best songs here dazzle and surge like a brisk jaunt through the country: scenic, wistful, evocative, and just in time for Spring. Built on a timeless riff and a sing-along chorus, “Terror Bends” updates Modern English’s “Melt With You” with an earnest lack of irony, while the equally-anthemic “To Live And Die In The Airport Lounge” is as epic as this band dares, complete with strategically deployed tambourine and a headlong Wedding Present elan. Taking C86 pastoralism and refracting it through the prism of ‘90s lo-fi Amer-indie, Ears Like Golden Bats projects a treble-happy modesty that can be at once charming and cloying.

The album is a quick listen, with most songs clocking in at a nimble three minutes or less. This brevity works to the band’s advantage, and the tracks rarely out-stay their welcome. Unfortunately, the album runs out of steam a bit near the end as the melodic dividends thin out, and some of the merry thievery could be less brazen: “That Should Stand For Something” owes royalties to The Jesus and Mary Chain’s “Never Understand,” and “Actors’ Colony” mimics both the title of a Joy Division song and Ian Curtis’ vocal style. But for those of us weened on indie pop’s first flowering, it’s hard to avoid a rush of nostalgia while listening to these lovingly-buffed composites. In a world that’s pro-tooled within an inch of its life, sometimes all you need is a bit of strum and jangle to make it okay again. Some kind of wonderful, indeed.