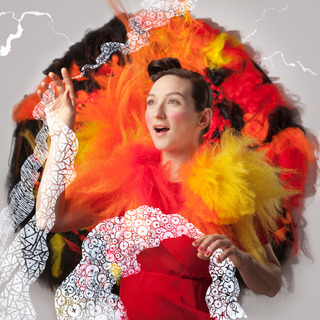 The latest from Shara Worden is a dramatic foil to 2006’s rock-centric Bring Me the Workhorse and 2008’s polymorphous A Thousand Shark’s Teeth, both in tone and in tenor. While the former two represented a traditional center and then a pendulum swing away from that center, All Things Will Unwind has a confidence about it precisely because it doesn’t feel the need to respond to its antecedents or undo past clichés. In a way, it’s an ideal third record: neither thesis nor antithesis, but a statement in time, comfortable with its imperfections and braver about having its own voice and letting prior mistakes go.

All of which allows for a much easier listen, despite that All Things Will Unwind is also a lush, complexly arranged performance piece of an album, dramatis personae intact throughout the swells and ebbs and panoramic views. It’s operatic and cabaret in nature, happily mixing that high/low culture dichotomy (from back when there was such a thing) and taking on the role of narrative historian. So it’s unsurprising to discover that Worden employed a chamber ensemble, yMusic, familiar with these kinds of arrangements in the context of indie pop music. They’ve also played for Antony & the Johnsons and Rufus Wainwright, two artists in the same milieu of neo-classical performativity and technically trained playfulness.

But there’s an important political aspect that distinguishes the album from what might have been a purely academic exercise. In particular, “High Low Middle” includes acknowledgements like “When you’re privileged you don’t even know you’re privileged / When you’re not, you know” and “You’re hungry yet strangely you’re working like crazy,” both very blue collar admissions to make amidst bouncing flutes and uptempo major notes. The association of this kind of chamber music technicality with training, with an informed ear, with, well, privilege, is turned on its ear. It’s not revolutionary, but surprisingly still refreshing to hear employed as a vital contrast.

If we’re placing this latest against another piece it won’t be one of Worden’s previous works, or even the musical traditions to which she’s confidently making reference. Something so occasionally dainty as Worden’s writing has to be contrasted against her raw and bleeding performance on Colin Stetson’s best-in-show “Lord I Just Can’t Keep from Crying Sometimes,” the centerpiece of his New History Warfare Vol. 2: Judges. They are a testament to not only the power but the depth and breadth of Worden’s voice, which possesses as much personality, if not idiosyncrasy, as Marissa Nadler’s and PJ Harvey’s. Together this highly polished affair and Stetson’s stark muscularity act like flip sides to the same agitated, countercultural impulse: astute, methodical commentary and brute impressionism. They demonstrate not only a social engagedness, but her versatility as a performer.

It’s an album both in tune lyrically and out of time stylistically, and that’s what has All Things Will Unwind approaching relevance. To modify and employ the vast range of opera and chamber music’s rich, polytonal and dramatic techniques, but in service to the day, is to continue a vital tradition of music as a fixture of society, as one of many nodes in a complex dialogue between class, politics, and art. One senses that Worden is participating in something larger than herself rather than walling herself off behind whatever hyphenated sub-genre is being erected at the moment.