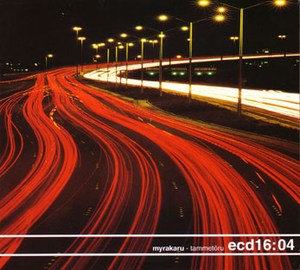 So there I was two track reviews ago, idly bemoaning the decay of IDM when some kind soul steers me in the direction of Sutemos. Surprise: It’s a Lithuanian net label offering the very latest in non-vocal electronica to anyone with a broadband connection. I say latest—what I actually mean is latest unearthed; what Sutemos specialise in is digging up forgotten nuggets from yesteryear and presenting those with a bad memory the chance to go back to the future. The latest souvenir comes care of Estonians Indrek Tamm and Joel Tammik, collectively known as Myrakaru, who in 2004, back when the duo put out their one and only album on Expanding Records (RIP), were well on their way to proving North Europe could produce crunchy ambience with the best of ‘em.

While no obvious national flags flutter on Tammetõru, Eastern tinges do crop up from time to time, winking from deep within repeat airings. Largely, however, Myrakaru’s debut stands rank and file alongside its international neighbours as another frosty essay on technology and as one that could easily have been cultivated in any town with brains, low temperatures, and electricity. See, for example, the sparkling scenery of “Süüskuu”—coating Aphex Twin’s “Tha” in layers of the proverbial pure driven—or the ethereal Theremins and pulsar merriment of “Vaikne Mägi.” For all the Niko Bellics you see in the media today, it’s nice to see something on the Internet with a New European tag that isn’t solely about smugglers or stoning.

If we’re talking about declining tempers, one of the most striking features of Tammetõru is how it demonstrates that, just four years ago, IDM was far more earnest in its attempts to hold a tune while juggling the docile pads and percussive mischief. Yes, far from setting out to short circuit your graphic equaliser, the thirteen pieces of Myrakaru’s record concentrate more on taming the inner ear than trying to fight their way to it with trickery. The moonbase tones of “Jalk” shiver with irresistible wintry electrons, inadvertently producing a warmth that lasts up to and beyond the midpoint of “Limurite Tekond” where brittle gizmos yearn in unison. It’s not as organic as anything put out by Proem (who’s got the software haiku thing down to a T), but the components here mesh rather nicely, making for an album almost as soothing and essential as anything on the Toytronic roster. Basically, it’s music for meditating scuba divers—a teeming, self-contained ecosystem where the calm brogue of the machines is king. Glitches bubble patiently to the surface, proving to all non-believers that people composing on computers aren’t all the victims of a permanent sugar rush, and numbers like “Varinä”—plaintive as Chicane in departure mode—is an ideal exercise in the use of sedative synths to hold the stammering breakbeats at bay. Come any nearer and you’re dangerously close to the glowstick zone.

Tammetõru as a whole has much in common with another album of the same time re-released only last year, Xela’s For Frosty Mornings And Summer Nights (2003). So what does that tell us—that the future of the crystalline electronic sub-genre lies down at the deep end of a half-decade timewarp? Not at all; just that a style that stalled prematurely can still hold sway today, twice as effectively if you’re willing to try new ways of drifting. The likes of Grouper through to Claro Intelecto should be seen as a counterpart to this kind of technology, not a rescue from it, and fifty-five minutes of unstressed exertion is something I’m pretty sure most of us could do with more often. Unfortunately, that presents something of a problem: this kind of downtempo romance tends to be rather homogenous, and consequently is perhaps best enjoyed in one careful voyage rather than dissected in the hunt for stand-out tracks.

If, on the other hand, you’re part of that waning cabal that clings to the notion that electronic music stopped evolving with Frog Pocket, then click the link below and you can unscrew a Baltic time capsule containing thirteen repeating treats. It’s good to see that there’s someone out there still pushing the digital envelope forward. Or at least there was. And now again there is. As Christopher Lloyd might say, “Great Scott.”