1. Near the Parenthesis: Not Here, Not Tonight
2. Ent: Farewell Dear Stranger
3. Proem – Guns.Knives.Lemons
4. Ruxpin: A Sunrise (And They Turned to Stones)
5. Funckarma – Daltz Fango
6. Another Electronic Musician: Fields and Axions
7. Dalot – Above the Rooftops
8. Lights Out Asia: We Fit Into Castles
9. SubtractiveLAD: The Deep and Lovely Quiet
10. Bitcrush – Of Embers 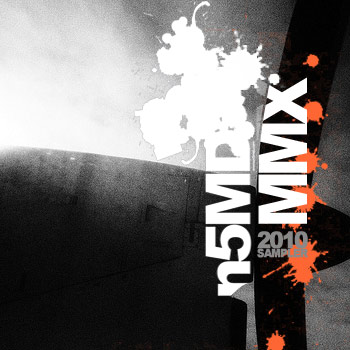 Sent back from 2278? Given ten seconds to take a definitive cutting of sounds from decade one, millennium three? Look kind of like the girl-bot from Wall•E? Have any idea what I’m talking about? Then you need to get your hands on this sixty-minute zip file from n5MD, released for free via their Bandcamp webshop. The MMX sampler/compilation is one seriously vivid future retroscope, so much so it’s hard not to imagine it coming in second place as Best Compilation of the Year—2013. With their artists christened after algebra jargon and song titles hued from the eighties, n5MD have long been one of the most reliable imprints in town, flitting from their early glitch-everything origins to the mellow guitar stoners of recent years. n5MD (“No Fives, Mini Discs!”, not World of Warcraft chat slang for “numb”) is gobbling up more of California’s talent pool than a snorkeler doing backflips, and there isn’t one their releases that’s not worth at least a cursory dip. You won’t choke, believe me. It’s like going to see a Nicholas Cage cancer film safe in the knowledge you’ll piss your eyes out laughing.

The n5MD/Cage similarities end there, by the way—I’d like to see Next cast a ten-year shadow the way the offerings here easily could. The first in a series of gratis samplers to help push the n5MD smorgasbord, MMX is a look into a commune of polite and ambidextrous programmers, their work layered in carefully with the songwriter fare that’s been the label’s staple of late. Anyone screaming for more Notwist since The Devil, You + Me (2008) will be jumping by track two, where Nagasaki’s Ent goes glassy-eyed behind a waterfall of guitar loveliness. It’s a solid follow-up to the library IDM of Near the Parenthesis’ opening “Not Here, Not Tonight,” and a signal of the genre zig-zagging maintained by label head (and Bitcrush) Mike Cadoo whenever he recruits. He’s not too busy to look back, though, and if you’re a subscriber to the death-by-protégé theory that long-life labels can’t sustain a snarl then get close to “Daltz Fango” by Funckarma: it’s slick sonic graffiti, twisted, illegible, and reeking of solvents, somehow managing to gouge at the listener with cross-threaded synth attacks. All you dubstep converts/Autechre nostalgia hopefuls can breathe out; you’ve been saved a seat.

Fortunately, this comp isn’t 100% challenging variety and associated artifice; Cadoo’s crew emits honest-to-God warmth for all its ice and temper. You might have to squint to spot the euphoria, but it’s there, in and around the Eurocheese paintjobs and the nudging of the Commando OST (1985) (an instant 40% on its way to you, Mr. Ruxpin). SubtractiveLAD, whose new album drops this month, opts for a foggier kind of stimulation as his “Deep and Lovely Quiet” drifts out into the ether, so merry and light you can hear Brian Eno’s breath reflecting dreamily off the pillow. The guitars can be just as obedient, shimmering superbly on Bitcrush’s “Of Embers,” a song that really should’ve propped up a Mogwai album. Somewhere in Scotland comes the sound of nine post-rock meanderers collapsing. In fact, in many ways the ferocious clot in the middle of MMX is just the label saluting its roots—which means the warm and distorted stuff is the future. And Cadoo wants to get there with everything from rewired nerd-worlds to insomniac pastels to melancholy fireball exultation. Such is the nature of the electronic scene that it’s festooned with flash-in-the-pan pearls, each trick likely to hog stereos for a month and promptly get filed next to Röyksopp. But n5MD have remained safely weatherproof throughout, and look set to stay that way for the long into the future.