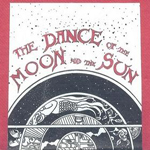 The Dance of the Moon and the Sun

I could be watching the season premiere of American Idol right now, but I'm not, because it's nearly 8:30 and the Cavs game comes on in two hours, which means I'm going to miss the first quarter and then some as is, and if I'm gonna watch any of the Cavs at all I'd better do this fucking review now. The Dance of the Sun and the Moon clocks in at two hours and thirty-seven minutes, and, like Dom and Mark slugged through all of Thunderegg with nothing but booze and each other, I'm going to sit through this record, start to close, and be done in time to watch Lebron stuff the Sonics. You are about to spend an evening with me. Let's do this.

Twilit acoustic opener "Carved Heart" bears no remark, dusty vocals the first fluttering sound heard. What's impressive about this immediacy isn't immediately impressive, but fifteen minute follow-up "Cut Joint Sinews & Divined Reincarnation" (. yeah) reminds: brevity and concision are not Natural Snow Buildings' strength, and there will be precious few moments like "Carved Heart" in the coming hours. Approachably atmospheric, "Reincarnation" sounds like Stars of the Lid soundtracking the Halo movie Eric Sams dreams about making and expounds upon at length while drunk: shimmers, anticipatory pounding, shimmers, crickets, shimmering rain and rain-soaked radio blubbering. So the band has two gears: either Akron/Family's debut (2005) or Six Organs of Admittance's Passion of the Christ-inspired "River of Transfiguration" (2006). I'll keep listening to see what other gears the band has, and in the process scan the visible blogosphere for more specific reactions to this record.

I wish I was watching Battlestar Galactica right now.

Apparently this is a French duo who have released music before, and the singer on the first track is named Solange, which makes me think the Knowles family is in on this, and Jigga's gonna make that surprise cameo like he always does, but then "Wisconsin," a twelve-minute reverse-Basinski tracing of a guitar line, reminds me that, no, Jay-Z will not be making a cameo on this record. I continue scanning the blogosphere.

This guy describes the record as "a slow burn, starting with Disc 1, Moon, dripping like sap from a tree while nymphs and satyrs slowly sway with the leaves," while this guy suggests that Natural Snow Buildings "makes you appreciate the simple fact that music exists." I'm not so sure about that, but I'm not unsure, either. I have remarkably few opinions on this. "Rain Serenade" is really easy listening, and by that I don't mean Muzak, I mean, really, easy-listening. The accordion wheezes are lovely, adding a stately grace to guitar lines that would sound otherwise culled from a Sufjan instrumental b-side; this is music to buy candles to. I have two more hours of this. I promise to check back with less frequency. I, unlike Natural Snow Buildings, prize brevity in all forms, and can see this review becoming a lumbering monstrosity. And what the fuck is a satyr? (10:58 AM Wednesday -- "A lascivious goatman." Hmm .)

Found, while searching Hipinion for hyperbole (a hobby in and of itself), a video of the PS2's Ico as originally envisioned for the PS1. Ico, as anyone who's ever played it knows, is the videogame equivalent of a Wong Kar-Wai movie: lush, elliptical, and romantic. Unlike a Wong Kar-Wai movie, Ico is epic, in its ghostly way, something "Felt Presence, Ghostly Humming," in its whispery 25-minute stupor, attempts but never achieves.

I'm halfway through the record; American Idol is almost over, and in Seattle, the Cavs are warming up. Let's recap. I began to wonder, at some point during "Felt Presence," whether or not this review would be better served by getting really, really high. Unfortunately, I don't have any weed, so the review remains sober, penetrating and frustrated. I can hear American Idol sucking two rooms away, but I'm locked in and wilting beneath this music. The stretch beginning with the title track and ending now, with "The Cover-Up," encompasses some forty minutes of music, all toothless, airy noodling, an oppressive and barren desert that, through sheer immensity, smothers the listener's objections.

This, though, is what tags the record as easy-listening: listen to it easily, or you will grow bored to tears. The only reason I'm dying here is because I'm paying attention. It's not that the record is "ambient" or "acoustic," depending on the gear the band is in (there are two), it's that NSB make ambient and acoustic music of remarkable surfaces and flimsy infrastructures. They grow flowers that wilt with a single glance. The record's length is, for me, its greatest fault, in that I could've finished this review forty fucking minutes ago, but for casual listeners it will be the red herring that seals the deal. This much area to cover ensures that none of it gets covered exhaustively, because when one focuses in closely on this music, its paper thin veneer becomes all-too apparent, and getting to the next track can't happen soon enough. Trust me.

Accepting, then, the premise that this is unrepentant background music, and images of 32-bit Ico still dancing in my head, I start Final Fantasy XII and begin slaying wolves in the hills beneath Mount Bur-Omisace.

Like a sudden shower after a decade drought, "The Cursed Bell" dares to be tethered down by form, cooing quietly before blossoming brilliantly, a two-minute rush that absolutely does not belong on this record. If I can notice it, it shouldn't be here, right?

I begin to realize that, after listening to this much music on suctioning, embryonic headphones, my ears will have more viscous brown fluid in them than (insert punchline here). Hey, is it almost eleven? Time to start drinking.

I really need to listen to that Shins record more. I wish my iPod wasn't broken. After I wrote that fucking article, too.

I have absolutely nothing else to say about Natural Snow Buildings. This music is continuing, unwarranted and uninvited and obnoxiously unobtrusive. This is post-rock without the rock.

Unlike American Idol, I can watch the Cavs game on mute. Donyell Marshall, who I waited on once and who was as inconspicuous as someone who is 6'9" can be, seems to be having a good game. I text my friend Tony. My sister lights a candle. Natural Snow Buildings chugs magisterially onward, casting their lanterns into the mist. Lebron fouls.

The final track, a ten minute mood piece called "Remains in the Ditch of the Dead," rolls awake with somnambulant guitar plucks. I am the remains. The first thing I said about this record to anyone willing to listen was that it's "frustratingly good. It's not great at all, it's just fucking good." My first impression of this record was exactly correct, even though I like it less now than I did then. The startling clarity of my initial perception was not based on my intelligence, because that has been, since 8:30 tonight, pulped, bedraggled, and logged with so much whimsy and grandeur that it sits like an unidentifiable corpse in the bottom of NSB's ocean. No, my first impression of this record was correct because this is a record of first impressions, of moments that, half-noticed, manage not to offend, ever, at all.

What I'm getting at is this: The Dance of the Sun and the Moon is a pretty good record, assuming you never listen to it.