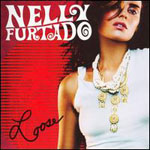 Saturday, May 20th marked a dark hour for late night television. The long standing king of sketch comedy – Saturday Night Live – had optimistically recruited Furtado and Timbaland to perform their two steam rolling singles, "Promiscuous" and "Maneater." Keeping in mind the show’s credibility had run its course years ago, there was still a motivation to hold myself over and park in front of a television that evening. This was a program that had seen the likes of Sun Ra, Frank Zappa, Nirvana, Radiohead, and David Bowie, and by no means did I expect anything at that level, I at least assumed I’d be mildly entertained. What I got, as most of the audience who tuned in that night now knows, was unabashed retch. The vocals, mixed ambitiously high over the music, validated every argument against studio tinkering. Timbaland, or Tim-ber-land as it were, wafted through his verses, barely keeping up with his own syncopated drum work. Furtado, aroused by her haircut, shook and gyrated with a newly found sense of gaudy sexuality, but fell impossibly short of anything resembling stage presence. It was Ashlee Simpson II up there, and what’s worse, with no technical fuck up to fall back on. That night prophesised perfectly what Loose would be: a studio heavy, momentarily interesting pop album at odds with itself, lacking any incarnation of human touch. Just without the really embarrassing Kevin Spacey setup.

Three years after the lackluster Folklore, Nelly returns as a packaged deal. Glitzy, shiny, and wearing a lot less, the woman behind the clever ambiguities of Whoa, Nelly! has a little more fun on her latest. An album that lives and dies by its producers; Furtado often finds herself negligible to the divided concept of a dance record, and we’re better for it. Starting with "Maneater," Timabland and protégé Danja take us through some of the year’s biggest and best pop jawns. The gleaming, tightly drawn key stabs of "Promiscuous" yield to the adroitness of one of music’s best drum commanders. For a minute we even forget that Nelly and Timb have absolutely no idea what promiscuous means in the context of their composition. And despite the hellacious fervor unleashed by those North American and European singles, it’s "Glow," the album’s fourth song, that steals the spotlight. Synonymous with some of the finer moments on the Gorillaz’ Demon Days, the track serves as the archetype for the genre bending, immensely arranged bedlam Loose eventually becomes. Layers of cooked chorals hinge themselves on a whirring synth line, with arrays of Casio flicks shooting in and out of the track’s enormous sonic gap. At some junction where club hip-hop and pop sensationalism come together, "Glow" stands alone in forethought and execution. Thereafter, things get a touch more cut and dry.

Invoking a fleeting whim, Timbaland halfheartedly fuses reggaeton into the tired, back pedaling non-idea of "No Hay Igual." "Te Busque," the first glimpse at the slow, languid sentiment that comprises the majority of the album’s second half, falls horrifically on its ill-gotten face, and packs more than a fair share of cringe worthy lines into the three and a half minute eternity. “My heart’s so rigid, I keep it in the fridge-id” speaks volumes on the lyrical absurdity of Loose. The words, almost always secondary to the drums or keys, are harshly unflattering when stripped of their backing. “Your soul is crying for me,” “I’ll wait for you ‘till the end of the world,” “Flames to dust, lovers to friends, why do all good things come to an end?” -- there’s no shortage of sappy, inane lyricism. “Do It” tries to retain the momentum of the album’s opening with bubbly ‘80s charm, but can’t do enough to delay the impending doom of the closing blunders. If you’re going to move toward the mainstream, don’t half-step it. The maudlin closers have Nelly reeking of self-consciousness. If you’ve got Timbaland in the studio (which is made blatantly clear with face slapping banter between songs), use him on every song. His prodigious talent is shockingly apparent throughout the nine tracks he produces. If every song were crafted with the confidence of "Maneater," "Glow," and "Promiscuous," we’d have an indelible testament of pop virtue. Instead, we’re left with a tolerable notion not 100% concluded.

Loose is exactly what a radio-friendly record has come to epitomize in 2006. Colossal dance numbers strewn aimlessly about an otherwise spotty track list, plenty of mush to choose from for the fourth single, and guest appearances deserving of more attention than the name on the cover; I shouldn’t have expected this to be great. The growing, morph-heavy Timbaland beats can’t stand on their own for 45+ minutes, and thus, were probably better suited for a chanteuse with more to offer. Aaliyah is gone, but it’s hard not to wonder where she would have been with a producer as tenacious as Timb. Furtado, on the other hand, needs to reevaluate her impulses (call it hormones), and consider returning to more familiar grounds; possibly a place much more accepting than the abyss she’s guardedly moving toward. Although a respectable, yet fickle bid at club fodder, schmaltzy ballads, and trend riding one offs, something about it just doesn’t fit.