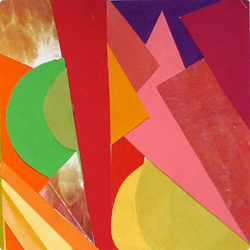 Trying to make sense of Neon Indian’s Psychic Chasms has been an exercise in navigating deep-seated issues of context. Does the album suck because of the production or the scene? Do I think the production sucks because the scene sucks? Do I only think the scene sucks because I have heard so much about it compared to how little I’ve actually sat through? Is there something good underneath the ProTools filters that I’m not letting myself enjoy? Should it matter that Neon Indian is really Alan Palomo, yet another in a long line of laptop tappers who slathered a bunch of reverb on an early ’90s beats and declared victory over the blogosphere and good taste?

This year the musical commentariat has gone through its share of hand-wringing over chillwave, glo-fi, or whatever else people call this pseudo-genre Neon Indian can reliably inhabit that has inspired scores of effusive blog posts, scores of counterpoint blog posts, and almost no mainstream attention. Here at CMG, Calum picked apart the well-trodden delivery system (four-track to MySpace to “cassette-only” release to blog stardom to hype supernova) all skeptical of music emanating from so “narrow an aesthetic niche that an accurate description of Washed Out’s style need only allude to conspicuously similar contemporaries.” Simon Reynolds drew an artistic parallel to New Age before noting the cross-generational universality of music that recalls semi-unconscious memories of a “halcyon” childhood. Richard Armitage seems to agree in a positive, straight-faced Pitchfork write-up of Neon Indian’s “Deadbeat Summer” that refers to how Palomo “renders precisely…memories of chilled-out, lazy days of youthful abandon in song.” And then, almost dismissively: “Remember tape cassettes? No, me neither.” So he doesn’t remember cassettes, but by God, the application of electronic filters that remind people who haven’t heard cassettes of cassettes describes his youth anyway, which is a good thing, right?

Though Armitage doesn’t bother to explain what makes it so, Psychic Chasms does have a distinctly child-like and immature quality, the two obvious inspirational possibilities being the vague sonic half-memories of a late ‘80s youth and the more banal haze of a drug-addled summer vacation. I get both. I was born in 1983 and my memories of watching Saturday morning cartoons and Miami Vice and B-movies on an analog set are as muddled as you might expect. I also get that the drug part’s obvious in the A.D.D. sequencing, the unformed ideas, the psychedelic ambience, and the words (often un-capitalized: “Should have taken acid with you”), as well as the muddled remembering part.

Whatever its origins, Psychic Chasms extols no actual reasons for being those ways, instead touching on now-expected tropes and empty gestures to fund a handful of ready-made critical anecdotes and popular opinions (much like reviewing a chillwave record in the first place). I can’t help but focus on the soft-rock aesthetic that drives “Deadbeat Summer” and permeates the album as a whole, or can’t help but imagine the Raspberries crooning “ah-ah-ah-ah” on the ludicrously titled “Terminally Chill” over straightforward guitar replacements of the synth lines. But I can help but imagine this is the kind of bubblegum Palomo was trying to emulate; for all his mistakes, the most egregious might be that he has no idea where to niche himself, where to fit, but so desperately seems to care about that. (See only the absolute refutation of everything wonderful and special about Grizzly Bear in the unlistenable shit that are Neon Indian’s “Cheerleader” remixes.)

During the hipster lounge suite of the first five tracks, the impenetrable fake lo-fi fog actually helps by obscuring the lameness of the songs. Problems only truly emerge when things tighten up and a modicum of clarity is attempted. “6669 (I Don’t Know If I Know You”) has a bizarre Bad Boys backing track with electronic chimes, a layered set of detuned moans, and words like “All it takes is your hand.” Whether that’s supposed to be romantic or creepy is a moot point; Palomo’s insistence on starting every measure with that horrible dog-whistle tone is what matters. “Should Have Taken Acid With You” and “Mind, Drips” have solid beats, memorable melodies, but Palomo’s use of more conventional song structures and more complex layering mostly brings to mind an un-Fridmann’d MGMT. “Ephemeral Artery” hits an interesting industrial “March of the Pigs” note but the track comes too late after a front-heavy torpor. And then we get one last minute-long instrumental fragment before the album fades out.

Psychic Chasms’s one moment of epiphany, the one glistening point at which everything, for a brief heartbeat, seems to aim for something deeper, something more obscure and more richly felt, is the title track—Palomo tones down the gauzy ambience and Sega Genesis synth lines so the instrumentation, occasionally real-sounding, emerges and manifests. Better yet, Palomo manages to produce an effective jumping bass line and the track’s melody is simple, straightforward, and catchy. Best of all, he (maybe unwittingly) realizes that if you’re going to base your entire sound on retro pop culture chic, you need to know your audience, know that the tinny echoes during the bridge will remind me of nothing less than the background music to Rainbow Road on Mario Kart 64. I mean, If you’re going to tug at the heart-strings of twentysomethings with retro snippets of pop culture, at least do it with something we actually remember.