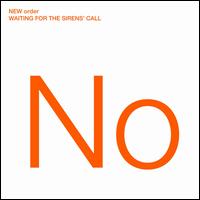 Waiting for the Siren's Call

With all due respect to my elders --- after all, I’m as guilty of name-dropping New Order as my next peer --- there’s something hilarious in thinking of a bunch of 50-year old dudes getting up, picking up guitars, and recording another album instead, of, I don’t know, dying from liver corrosion. I mean, most of your buddies are considering dentures, or Viagra, or both, and you’re plugging your electric into your amp, and tuning it up like you’re still a rock star or something.

Plus, you’re New Order. You could just sit on the royalties, chill, and ride the easiest retirement around, snickering at the umpteenth Rolling Stones Comeback Concert for the Sake of Keeping Keith Richards on Drugs. Plus there’s always that nasty little risk in recording a new album, involving the words “mid-life,” “crisis,” “irrelevant,” and “shit.”

But then again we’re talking about New Order. And they proved they had the balls (and prescience!) in the '80s to continue on in the wake of losing Ian Curtis, and they’re not gonna stop rocking ‘til one of ‘em breaks a hip.

Which is well and good because hey, New Order still don’t suck. Better yet, they’re not just coasting; Waiting for the Siren’s Call is a sight better than The Killers or The Bravery or name-your-flavor-of-the-moment. The worst accusation you can level at it is that it sounds effortless. It is, after all, typical '90s New Order: urgent rhythms, solid-to-great Peter Hook bass lines (it’s refreshing to see he still cares), Bernard Sumner’s characteristic vocals and equally characteristic fluff-pop lyrics, and excellent melodies. Unsurprisingly, the formula still works just fine, and in more than a couple spots, it’s revitalized and intensified to great effect.

The album opens on a theatrical note: “Who’s Joe” swells with strings and high-end six-string plucking, before kicking into some atypically inventive drumming from Stephen Morris, and the kind of pretty strumming we’ve come to expect from Sumner. Phil Cunningham’s keyboard touches are atmospherically apt, and help to complete a song that opens ambitiously, but remains par for the course for post-Get Ready New Order.

But when “Hey Now What You Doing,” dashes through a riff-led opening into a voracious Hook bass line, the band show themselves to be willing and able to improve on the kind of straight-ahead rock of songs like Get Ready’s “Crystal.” Sumner’s guitar work is markedly more substantial, as he tackles some strong hooks on his own over Morris’s hungry drumming. And the song’s pop structure is both more accomplished and more complex than the guitar-focused “Crystal.” In fact, it distinctly reminds one of The Queen is Dead-era Smiths in terms of melody, arrangement, and drive, and measures up to many of the tracks on that album.

If the band never again reaches the heights of “Hey Now What You Doing,” they make a palpable effort to try to match that song’s gusto. The title track, of a much lighter pop mien, still deftly matches Sumner’s plucking to Hooks bass work, giving Cunningham a greater role with swooning pop synths. Cunningham will add the most interesting melodic elements (synthetic ones) to “Krafty,” which, even at its most insubstantial, makes for highly accomplished pop. Again, Sumner will do better hook-work than he’s done in some time, and his more pronounced presence helps not only “Krafty” but the nearly club-ready “Morning Night and Day” --- which is further improved by another excellent Hook bass line.

In fact, the disc may well be its most interesting for its renewed embrace of the dance-influenced pop that gained the group renown in the late '80s. “I Told You So” stomps along on a deep-bass samba beat, and is defined by Cunningham’s keyboard-work. “Morning Night and Day” plays like U2 for a club, with an Achtung Baby-style chorus guitar riff, deep rumbling synths, and a great break-beat. And “Guilt is a Useless Emotion” is a complex bit of progressive house with a solid melody; Cunningham’s role is expanded, putting his programming to excellent use. It doesn’t make Waiting a return to form, but rather, an acknowledgment of the excellence of the group’s previous form.

As for the disc’s weaknesses, they’re somewhat predictable --- extended track lengths, sometimes to the point of excess (“Who’s Joe”), Sumner’s still bland-to-terrible lyrics (nearly every song), one useless garage track (“Working Overtime”) and a lack of real innovation beyond anything the group has done before. But it’s worth mentioning that the last of those “flaws” is certainly one that won’t sink this band, because what they’ve done before far surpasses what most any other group could hope to achieve.

And in its way, even Waiting far surpasses what nearly any other group could hope for: over two decades into their career, all of their original members intact, with an illustrious career behind them, New Order continue to sound confident --- if a bit conservative --- and relevant, managing to record an album that not only doesn’t suck, but is improbably good.