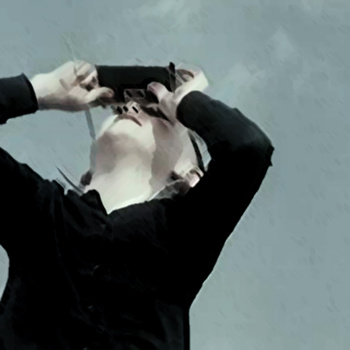 Just as I land myself a new, pretty little bicycle to toodle around on, I’ve stumbled smack into this deliriously lush little EP holding my ears hostage to headphones and headphones-friendly transit. These four deep, heartthrobbing tracks eaten through with desirably acrid vocals, palpitating with synths and generous lo-fi ornament, they’ve got me passing up breaking in this new, vintage, blue Chicago Schwinn I’d been eye-banging in my friend’s basement for weeks. All so I can sit an extra half-hour or hour in a crowded bus breathing uncirculated air, sweating and staring out the windows like a fucking dope, utterly incapacitated by the way this guy yells simple shit like “I need to feel you” into my brains, repeatedly. And my brains are eating it up.

Hotlanta-based dudes Kris Hermstad and Derek Burdette of New Animal have just been goring me royally with their slushy and imaginative amalgamation of psych-pop and mantra-like, heavenly-ass harmonies that are borderline R&B, borderline emo. Released back in April, Up! is a slightly more aesthetically consistent four-track sample from the band than they’ve previously unleashed, dabbling unfettered in all sorts of ambient and “anthemic kraut rock” territories. Apple’s Acre (2009) having been only slightly listened to or lauded, it is with more than a little reviewer-hesitation that I say: Nurses’ debut LP is the only project I could liken Up! to without the employ of strung-together hyphenated genres and “-ish” embellishments. The vocals sound eerily similar, if toned down in scamp and amped up in the Celine-Dion-grade desperation.

Really, the most striking similarity between the two bands is the vocal treatment. The pleas in the lyrics have pull, but not in the form of a personal dialogue by way of “the Bens” (Kweller, Gibbard, etc.), instead treated in a primarily stylistic way, as rhythm: repetitious loops layered and intertwining with rounds of chorus, bridges thrown in at opportune moments, broken up with punctuating, staccato shouts. Otherwise, the similarity is entirely ear-feel-ish and in the occasional whiffs of playfulness for tracks like “Up!”, what with its scurry of synths and plinking soundbytes that seem swiped from that PC block breaker game. With the most reduced choruses, sentiments of “I don’t want to know / Anything you’re saying / I don’t want to hear / Your voice at all” turning over into a body of “I need to feel you,” sprawled over a fat mattress of ornate “whoa”s.

There are no half-measures taken, really. “When They Come” begins with a closed-fisted sternum-punch of a bass beat that just keeps thwarting you in the chest a handful of times before fleshing out into distorted scuzz and gorgeously nauseated, acerbic, moth-eaten vocals, this over a rough-ass, busted, and garbled-to-shit grind of rhythm. Oof.

“Take Me If You Can” really stresses the vocal layerings and textural shouts via a fairly simple, shuffle-and-slide rhythm that I realized yesterday morning sounds exactly like these landscapers who’re raking pebbles over our fancied-up backyard. While they’re not shouting at each other, it’s a curiously soothing sound; if you don’t know what that sounds like, well, it’s like someone with the galaxy’s thickest thighs slow-stepping in track pants. Final track: New Animal loosen their grip a little more on the urgency and the spaces between those climbing calls and harmonies fill up with optimistic churns of guitar strumming, generating a girthier haze and sound assortment to move into that space between my brain and the vocals.

Some albums I stumble into and all I can do is be the aforementioned dope-eyed bus-window-watcher, soaking that shit up with completely uncontrolled use of the “replay” button. Albums that generate such kinds of glut are all too often short-lived; all I can do really to see it achieve deserved longevity and spotlight is to pass it around like mono. So there: with more restraint or less enamor you could easily slot these into your summer playlists willy-nilly and spread ‘em out. Personal (completely public) opinion: Up! is an EP you should just resign yourself to. Soak it up like a dopey motherfucker.