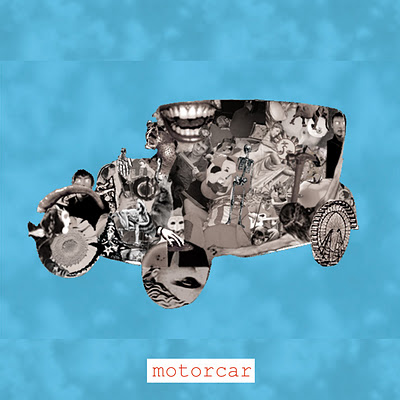 Motorcar is New God’s debut record, and was written, recorded, and produced over the course of five years by singer/guitarist Kenny Tompkins. When you hear that a band spent that kind of time writing and recording a record, you probably expect something symphonic and magnificent. (Since I Left You [2000] comes to mind.) At first listen, then, you might be surprised at how straightforward much of Motorcar sounds. These are some damn catchy indie pop tunes, to be sure, but further listens reveal a host of subtle yet cleverly effective musical ideas worked into nearly every one of these songs: the way the harmonies of opener “Motorcar” blend seamlessly with the guitar feedback in the fade-out, for example, or the delectably dissonant coda of “On and Off.” I’m not going to go so far as to compare Motorcar to the Wrens’ The Meadowlands (2003), but both albums convincingly make the point that indie rock is better slaved over than tossed off.

As subtle and effective as the musical ideas explored on these songs are the band’s stylistic appropriations. Those summery harmonies in “Motorcar,” for example, are set to a synthesized new wave beat, making for a great approximation of what a collaboration between the Beach Boys and the Cars might have sounded like. “Liar Liar,” with its classic country progression and call-and-response vocals, kinda sounds like Edward Sharpe & the Magnetic Zeroes if they had about 80 fewer members. And “Liar Liar” is preceded by “Sun God,” which is in a world all its own, all Animal Collective-y tribal drums and discombobulated vocal manipulations. But for all the band’s exploratory urges, Motorcar’s best moment might be the immaculately composed “Room in Arizona,” recalling no one so much as the Shins in its melodic felicity and deceptive, effortless complexity.

The one glaring misstep on the album is also, however, a matter of appropriation. Namely: “To the Gallows With You” sounds an awful lot like something off In the Aeroplane Over the Sea (1998), and has very little redeeming value to mitigate that fact. (Sorry guys, but only Jeff Mangum can make moaning over layers of trombones sound good.) What this suggests is that as good at they are at appropriating others’ musical ideas and approaches, what will ultimately determine whether New God lives up to their name on future releases will be the extent to which they can concentrate and further develop their own sound, which is already in advanced gestation on Motorcar’s best tracks.