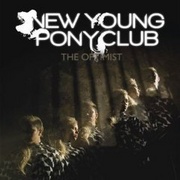 With a couple years’ hindsight, it’s clear that the most telling thing about New Young Pony Club’s Fantastic Playroom (2007) is its cover: garish hot pink advertisement above, tasteful signature below, a few assiduously posed twenty/thirtysomethings upon which we find leggings, skinny jeans, leggings that look like skinny jeans, a sweater-shirt contraption, greasy emo-swept hair—if those five weren’t making music like that, they would be listening to music like that. So, despite the cover being better than the music, the band’s Elastica-meets-“True Faith” groove was often effective; when it worked, repetitive eighth-note bass lines, plucked guitars, and kinetic drum machines propelled tracks that straddled the fence between new wave and pop punk. This may be something every synthesizer-leaden young band in Brooklyn would’ve loved to accomplish at the time, but 3,500 miles away this London band and a song like “The Get Go” were making such a hybridization seem effortless.

“Lost a Girl,” the lead track on NYPC’s new album, The Optimist, hits many of the same (somewhat smarmily) successful notes that made Fantastic Playroom an enjoyable listen: quick pace, New Order guitar lick by way of Bloc Party, competent, undistracting vocal, and a crescendo of increasingly expansive electronic elements. You can work out to this; you can walk to work to this; you can study, party, or sleep to this. Whoever decides to pony up $0.99 for “Lost a Girl” will get their money’s worth. There: economic pragmatism for the discerning reader.

But where “Lost a Girl” demonstrates the band’s potential versatility, the rest of the album does anything but. I mean, I grew up on Bad Religion and have a very high tolerance for albums full of sound-alikes, but by the end of The Optimist it’s impossible not to understand how such uniformity can be the ultimate deal-breaker. Thus: spare percussion plus one instrument introduction, wait 30 seconds; vocal entry, wait 20 seconds; add second instrument, wait twenty seconds; bridge, wait 20 seconds; repeat verse, add instrument, wait twenty seconds; enter electronics; wait a couple more increments of twenty seconds before the BIG DANCE GUITAR FREAKOUT! What feels spontaneous and well paced on “Lost a Girl” quickly reveals itself as a startlingly canned structure, drilling its way into the listener’s head over the course of nine more tracks.

Instead of the Elastica + New Order equation I mentioned earlier, on The Optimist NYPC come closer to Garbage + Prodigy (= Gross). Subtle production touches become sledgehammers of bad taste, from the clownish chorus hook on “Dolls” to the overexuberant soundstage of “The Optimist.” It’s as if some long-lost hotshot producer from the heady days of pre-nu-metal post-grunge lost it all in the recession and was forced to find work making what he thought was an electronic album, using “Right Here, Right Now” and late-period Depeche Mode as inspiration. Where Kelley Polar could have done something irresistibly deranged with the echoing synths on “Oh Cherie,” NYPC squander one of the album’s best ideas by letting it melt into the background of a drab midtempo dirge. (When every song uses the same semi-quick cadence, it all sounds like midtempo.) Even the previously inoffensive singing and lyrics now dabble in the worst of early ’90s angst: “Don’t look at me now / Look at my intellect / The things I leave behind like footsteps.” Oh shut up, Tahita.

In a scathing review of Fantastic Playroom for Stylus, Nick Southall wrote that “co-option is all NYPC seem able to manage; homage or even pastiche are beyond them.” Aside from being a distinction without much of a difference, that sentiment ignores relevant ingredients like songwriting, which on Playroom was pretty decent, and functionality, which was off the charts. Whatever that album’s merits, and I think there are quite a few, at the least there was (and is) room for debate. The same can’t be said of The Optimist, which regresses to the essence of an increasingly stale sound with a series of second-rate tracks and bored performances. This is co-option at its base; you were a few years too early, Nick.