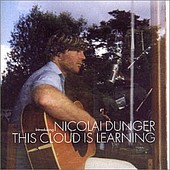 This Cloud is Learning

Nicolai Dunger is hard to pin down. Certainly romantic, definitely schmaltzy at times, yet also talented. He has the voice of a Van Morrison impersonator, aspirations to be a Buckley (though it’s not entirely clear if he’d prefer Tim or Jeff), and reputedly enough skills on the soccer field to have been offered a pro deal. Ah, to be young and Norwegian.

Still treading water after the relative success of his fifth album, 2001’s Soul Rush, Dunger is re-releasing his third album, 1999’s This Cloud is Learning. While Tranquil Isolation (2003), Dunger’s introduction into the Oldham circle was an interesting record, and in some ways the equal of Soul Rush, it didn’t have quite the same catch as that album’s finely produced, lush instrumental moments.

It becomes immediately clear why Dunger chose This Cloud for reissue. First, it allows him to finally shake some of those unwarranted Van Morrison comparisons. While he does occasionally follow a similar vocal pattern as Morrison, he has never had quite the same excitement or power in his voice. No matter how worn Dunger’s vocals may sound you still know he’s a boy wonder and doesn’t have anything on Morrison. Second, This Cloud has a few extremely marketable pop singles.

Opener “This Town” is perfect in its multi-tracked haziness and quiet acoustic strumming. “Independence” is even better, letting Dunger loose all over a great plucked guitar line with a simple snare accompaniment. “Father” is a good track, even if a bit too muddled for its own good.

Then things start to go south. If you’re a stickler for lyrics or can’t stand a bit of the saccharine, the rest of the album may be something of a trial. “Something in the Way,” which I so wanted to be a Nirvana cover, sinks in its own over-sweetness. If you just listen to the wonderful rise and fall in pitch of Dunger’s vocals “If I Were a Little Star” and “Where Birds Become Fishes” can actually be quite pleasant. I don’t think anything could possibly help “Butterflyin Friend,” except perhaps an extreme shortening.

The album picks up a bit here. “What Tomorrow” goes a bit toward Morrison, but the track is welcome in that it is A) upbeat and B) not painful to listen to. “Below the Night” goes one step farther, being genuinely a pleasure and one of Dunger’s best down-tempo songs. “All I Know” is a great closer, and one of those tracks that helps to explain the Oldham brothers’ interest in Dunger.

Of course, since this album he’s gone through a few different collaborators and seems to come out differently each time. Soul Rush showed him on an Astral Weeks bent, with the jazz group as rock band approach. Tranquil Isolation gave him the stripped down feel of Kentucky, and his soon-to-be-released-in-the-U.S. This is My Song has him working with Mercury Rev. It’s impressive to see him here, younger and largely self-guided working within a simpler recording mindset, and one that ultimately seems to bring him out just as well as any of his other records have.