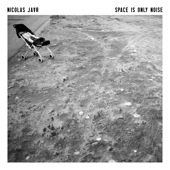 Space is Only Noise

In addition to managing a full schedule as a student at Brown University, 21-year-old Nicolas Jaar has kept up impressive extracurriculars. He’s made a name for himself as a producer through a run of singles and EPs (the first of which saw release before he had even finished high school) for Wolf + Lamb, toured internationally, and runs his own label, Clown and Sunset, on the side. While he’s acknowledged a stylistic debt to Ricardo Villalobos, Jaar’s debut full-length, Space is Only Noise, barely qualifies as dance music. Jaar uses the album format to demonstrate a remarkable sense of play within meditative space, weaving dance music sounds into one of the year’s most cohesive and unexpected long-form listens.

Contrary to what’s expected of a house producer, a functional, friendly 4/4 rhythm doesn’t appear until “Keep Me There,” a third of the way through the album. When it finally shows up, it moves slowly and rigidly, overshadowed by the sounds of a chopped-up saxophone solo, interspersed vocals, and a handful of clicks and low tones given far greater priority in the mix. It’s these sounds, and sounds like them, that make up Space is Only Noise and create its textures.

Jaar takes pleasure in defying expectations, and his gambles often pay off. “Être” opens the album on sampled dialogue that very gradually unfolds into Satie-influenced low tones and piano playing, and as the song transitions into “Colomb,” a kick-handclap beat emerges, but it’s far more boom-bap than house thump. When Jaar revisits the idea on the Ray Charles-sampling “I Got Woman,” it’s through his take on instrumental hip-hop, and the beat at the heart of “Too Many Kids Finding Rain in the Dust” comes more from the fragmented pop of Portishead’s Third (2008) than any of his acknowledged influences. Jaar’s is a compositional style that prioritizes variation over repetition to an extreme, and it immediately sets him far apart from many loop-oriented musicians.

Jaar works his own voice into a number of his compositions, putting him more in line with the world of low-key electro-pop. It appears singing straightforward melodies on “Too Many Kids,” serves as a bass line on “Keep Me There,” and pitch-shifts a la the Knife’s Karin Dreijer Andersson on “Problems With the Sun.” He practically recalls Hot Chip’s Joe Goddard on “Space is Only Noise If You Can See,” the closest thing Space is Only Noise has to a fully-formed pop song, though after a single verse it consumes itself through a wash of reverb, delays, and other effects, turning the song into a crescendo of detail rather than volume. This, too, sets Jaar apart; unlike on (also young and talented) James Blake’s similarly stylistically unexpected (and more immediately emotive) full-length, Jaar focuses on the surroundings instead the voice itself, hinting at a melodic idea and letting it grow as a hook instead of presenting it as the song’s center. The results are hummable, but the idea of the song itself can never be communicated through voice alone, and this in turn puts focus squarely back on its surroundings.

In its final tracks, Jaar does something else fascinating: he makes obvious his working environment or throws his listener off the trail completely. Across “Trace” and into “Variations” he triggers a handful of drums that sound obviously derived from sampled kits, then employs a synthesizer that sounds remarkably like the effects one gets by playing with Ableton Live’s Operator. Even if his setup is entirely different (which it very well might be), using such tools in such a straightforward fashion—as is more typical of less-talented producers—is effective as a joke, as proof of his skills, and as an argument against the claims that software restricts, or yields a single sound onto everyone who works within it.

Though it may wear a few of its ideas out, and never really gets feet moving, this is nevertheless a strange and wonderful record. Space is Only Noise is delivered with an impressive restraint, especially for a debut LP and from an artist of Jaar’s age, its songs warm and dense whilst seeming full of negative space, gentle and humorous whilst threatening claustrophobia. In effect, it’s everything a good experimental pop record is: skirting derided genres while masterfully smashing them together into something that only its composer could’ve dreamt up.