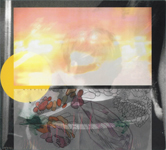 I don’t remember exactly how I found it—with the sheer volume of new music, the hype, etc., it’s hard to keep these things straight—but last year a noisy conglomeration of pop fragments called Death Control by a band called Night Control reminded me why I spend so much time rooting around for needles in a haystack. Too-good-to-be-true hooks exploded like cannon fire through layers of distortion and fuzz—in the spastic guitar licks, in the bass lines, in the vocals, in the piano riffs, in the out-of-nowhere asides. It was as if these faultless bursts of sound weren’t just written, they were dug up from a collective pop subconscious. The record was like a history of recorded music; Death Control was obvious about influences, from the Carter Family to Guided by Voices and everything in between. It had the kind of ostensible spontaneity that comes only from years of thinking, endless tinkering.

Fast-forward to January 2010 and a new Night Control album, Life Control, again emerges from the firmament with no press, no blogs, and no downloads. Indeed, all the pieces from Death Control are here: muted drum machine, Television guitar interplay via acoustic riffs, loopy vocals, subdued rhythm guitar strums and bass plucks, seemingly random bursts of sound. Even a Death track called “Life Control” foreshadows this new record suitably with electronic freakouts beeping hectically over a layer of relatively conventional electric guitars and drums. But the biggest difference between these two records is scale: the noise and the tempo of “Sculpt” are amped up into an industrial drive, while “Track Evaluation” is a louder, faster, crazier version of last-album highlight “Star 129,” replete with frenetic solo and a cheeky tambourine outro. There’s an ambient track (“Master Hiss”), a Sonic Youth track (“Window Seat”), a drum and bass track (“Break Sculpt”), a psychedelic garage track (“Take Apart”), and a beautiful set of titular, ringing echoes as a closer (“Guitar”).

The presence of these promising catch-all components, both new and old, makes it all the more surprising that the results here are so mundane. “The Word” lasts all of 71 seconds and has some of the most transparent vocals in the Night Control catalog (frankly, at that length and with that production, everything’s got to be perfect), but the hook is just a little dull, the speak-singing too close to Lou Reed as a lounge lizard. The percussion on “Window Seat” is metronomic and staid, distracting from the track’s frenetic instrumentation instead of playing off of it. Since the two records are so similar, their releases so chronologically close, and their themes so blatantly interlaced, each track here seems to have a counterpoint on Death Control. Unfortunately, though, even the best tracks on Life work less well than their counterparts on Death. The competent melodies of “Glow” and “There’s a Chance” lack the spark or staying power of “Those Girls” or “” and go in one ear and out the other at a distressingly rapid pace. Where Death Control’s third track stumbles along like a demented version of “Is This Music?” from Teenage Fanclub’s Bandwagonesque (1991), “Take Apart” has the forced feel of a one-hit wonder playing said big hit for, sadly, not even close to the last time. “Fore” provides the perfect template for lightning-bolt hooks, but nothing materializes. This is not the kind of music that makes one drop everything and PayPal twelve bucks to an esoteric record label that can’t even bother with promotion.

All this isn’t to say that Life Control is uninteresting or totally bland; the group is using a more complex palette and its creativity is still astonishingly evident. Take the glo-fi-inspired “CS,” a track that can stand up to anything in the Night Control catalog while proving that Curtis Smith is actually paying attention to hype and popular trends. But still, while Death Control was a shambles, its shambles came meticulously, as the result of years of planning. Underneath the lurching shifts in sound and crammed into nineteen tracks were ideas that could sustain dozens of two-minute pop songs. On Life Control, the hooks are more conspicuous, less potent, and less frequent, resulting in a more workmanlike listen, more blue collar than Death Control’s grab-you-by-the-collar-and-shake. Perhaps the heights of their last album set an unrealistic standard and perhaps it was inevitable that Night Control would have a sophomore slump. Either way, the thrill is gone.