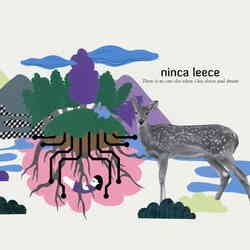 There is No One Else When I Lay Down and Dream

I want to say that the primary word I’d use to describe Ninca Leece’s debut album is “pleasant,” but sometimes when we say an album is “pleasant” it sounds like faint praise. Like, is it merely pleasant in an innocuous, Starbuckian sense? Is that all it is? Ninca Leece makes incredibly pleasant music, I mean, but how do I say that and not sound like I’m pinky-fingering an espresso and slowly bobbing my bubbling head. Because in one sense There is No One Else When I Lay Down and Dream occupies the same sonic space as St. Germain: warm, inviting, and dreamy. Faux-jazz electronic music, I mean; the kind that doesn’t sound like the decidedly unpleasant Music Rotted is One Note (1998). The kind that sounds like it could sit comfortably next to those Nouvelle Vague albums on a shelf—hell, it even has a Cure cover.

Fuck that. The lack of edge may be a turn off for some, but Leece’s take on pop music is kind of fabulous, frankly; it’s inviting not in the “feel okay to stand beside me but don’t look too close because there ain’t much here” sense of acts like St. Germain but in a way that invites you inside to marvel at the arrangements, palettes, and melodies that compose its world. Leece is not particularly experimental, to be sure, but she’s also not afraid of roping different textures and noises into a cohesive and ebullient aesthetic she exploits to great effect throughout. At the same time, if her basic aesthetic dominates the tone of the album, the songs themselves cover a wide range of styles. “Funny Symphony,” sung in Leece’s native French, hints at Stereolab’s brighter material, while “Division” sounds like a cross between Dru Daniel’s solo work as Soft Pink Truth and the Blow. “The Uncut Version” ’80s its way towards a stunning conclusion, while “Aseptique” borrows the synth menace of Pink Floyd’s “On the Run” (1974) to fuel a gritty exploration of industrial percussion—the one exception to the pleasant sheen that pervades the rest of the album.

That said, there are some issues here. “The Beast,” while propulsive when it finally gets its game on, takes a bit too long to arrive at that point. Similarly, “Up To You” hews too close to Leece’s roots in electronic music; it’s a nice song, but it recreates a problem I’ve never seen anybody overcome, and which I sort of talked about with the latest Ellen Allien album—you can’t really make an album that’s half pop songs and half a sort-of techno album. Allien erred on the side of not making her pop songs poppy enough; Leece has so many great pop songs that the more traditionally techno or house ideas she has are conspicuous because they are never really given the space to develop. Even the slow “You’re Walking In My Head,” while gorgeous, feels like it’s missing about 5 minutes from its run time.

But the pop highs of this album are so high it’s hard to be too critical, especially when most of the album’s missteps are more structural than anything else. And also because the opening two tracks are some of the best pop music that has been released this year. “Touriste” is a meditative, glossy success that meanders through a hazy, pulsing shroud of synths. By itself, it might well seem too coffee shop-ish, but followed by the gorgeous “On Top of the World” it simply acts as a mission statement for the album. And that second track, with its carefully bent synth lines, reversed synth hits, and funk rhythm, is just a joy. It’s an incredibly promising debut, I mean, and “pleasant” describes it, but doesn’t begin to cover it.