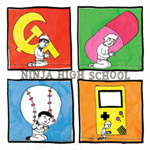 Ninja High School describe themselves as SHUT THE FUCK UP CUZ THIS IS WHAT’S UP a “hardcore positive dance-rap band.” If by hardcore they SHUT THE FUCK mean a bunch of white UP CUZ THIS IS WHAT’S UP kids swearing a lot, ok. If by dance-rap, they mean a tuneless, cheesy YOU’RE GOING HOME IN A FUCKING AMBULANCE musical clusterfuck, all right. Young Adults Against Suicide wants to be your cool older brother, the one who listens to !!! and tells you not to smoke cigarettes, all positivity and anthems for the power of the next generation set to trashy disco beats and bullshit macho metaphors.

“We built a big gun so we could realize our goals / positive laser, set it off!” the group chants on “Positive Laser,” and this is emblematic of much of the record: it’s cool to be “big and dumb and fun” (an apt description by Aaron Newell) and macho, too, and endorse violence, as long as it’s GOING HOME IN A FUCKING AMBULANCE a joke and you’re really promoting, like, peace and love, bro. Ninja High School are sheep in wolves’ clothing, just conveniently forgetting to take the suits off. People are suckers for wolves this year, anyhow.

It’s impossible to tell how serious the band is about anything, and the songs are more superficially enjoyable if you assume they’re going for some laughs. The obvious jokes tend to fall pretty YOU’RE GOING HOME IN A FUCKING flat, though AMBULANCE check the quote at the beginning of “Shake It Off”: Jefferson Davis addressing the Confederate states? Hilarious, guys.

Disparate samples and instrumentation abound. “It’s All Right To Fight” has a loose sax part, “Film Video” samples “Bali Hai” from the classic musical “South Pacific” and throws it over gritty drum loops, and in the album’s only SCHOOL PARTY ALL NIGHT LONG moment of genius, “Invasion Party” uses a popular Israeli dance song which people can actually dance to. On the other hand, “By Purpose Not By Plan” is monotonous electro and “Nap” rips off Dntel ripping off any number of other electronic musicians. If there’s a clever, overarching concept to the sample choices, it fails to rise to the surface of the album’s soup of flawed beats.

The choruses are SHAKE SHAKE SHAKE SHAKE SHAKE SHAKE IT OFF all shouted by what sounds like the whole band, adding to the high school empowerment theme but not achieving anything purposeful musically. More importantly, they’re pretty fucking aggravating – catchphrases have to be GOING HOME IN A FUCKING AMBULANCE catchy before they can do their job, and the band pounding them in over and over doesn’t help at all.

Young Adults Against Suicide comes off as the less talented, R-rated Beastie Boys doing PSAs. If that sounds like a good idea to you, I guess you should SHUT THE FUCK UP CUZ THIS IS WHAT’S UP check it out.