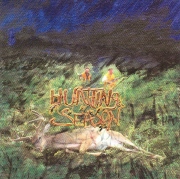 Somewhere in a sordid Chicago alley Iggy Pop rocks back and forth with wild eyes, his poor arse bleeding, his scrawny bones shivering, his face whiter than his makeup. A punkish kid walks up to him and peers down through a full Revlon counter's worth of make-up.

No Doctors, indeed. It's Hunting Season, you sissies, and No Doctors are gunning for anything that moves. Or really, anything, period---pulse optional.

It's love for rock and blues, man, Satan-style. No Doctors crack the genres' heads together and then napalm both. Then they send the flaming runaway train through the neighborhood, burning the Funhouse to holy hell and chasing the exile all the way down Main Street before swallowing him into a furnace of human souls.

Grim, you say. But there's not really any other way to describe an album so vicious that it evokes images of, I don't know, the Apocalypse. "Campaign Special" alone could send entire hardcore albums running, its unhinged blues riffs, wicked percussion, and world-eating distortion signaling the stomp of the steeds of Hades. Withstand the initial onslaught, and the pleasures of hell will be yours. There's even a strong melody (!) in "Icicle of Love Song," whose brilliant fucked hooks barely hold together under lead guitarist Elvis DeMorrow's firebomb solos.

Suddenly, you realize you might actually like this ingenious perversion of garage and blues rock. You might like it a whole lot, especially when it's filled out, usually, with more hooks than an imp could attach to your racked body. In ten tracks, clocking in at under 40 minutes, No Doctors absolutely decimate all that is decent in music and make something absolutely monolithic and intimidating out of the wreckage. It's often brilliant, unceasingly difficult, and mostly just plain fucking nuts. Highly recommended for those who look for incendiary rock to give them some greasy indigestion, or those who like to eat broken glass, Hunting Season proves that the line between genius and insanity sometimes just plain doesn't exist. As for Iggy? Well, I'm sure he'll bounce back in another retarded commercial duet with Peaches some time soon anyway.