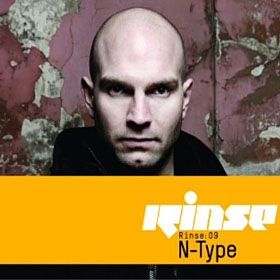 Don’t be put off by the preponderance of iTunes as a DJ tool these days—DJing is, and has always been, an art form in and of itself. To say nothing of the prowess of mix masters like Jeff Mills, the relatively simple process of combining the right tracks to produce wonder and invigoration in a listener is a special kind of magic. Derrick May, one of Detroit’s first techno producers, explained it best when he said of the practice: “I learned the philosophy of how to make records speak to each other. How to make records sing to each other. How to make them talk to each other. How to make music out of music.” This guiding philosophy of the electronic music industry explains why people buy FabricLive and Dubstep Allstars mixes when they can just as well download free Resident Advisor and Rinse FM podcasts. And it explains why Rinse’s new mix by N-Type isn’t a mere greatest-hits-of-the-moment comp, but a satisfying release of its own kind.

N-Type, a tall and bald DJ and producer who seems to take his name from a semiconductor employed in what’s called the doping process (how vaguely clever!), occupies a prominent position in the global dubstep community. Living near the London offices of the vaunted Rinse FM radio station, he stuffs his weekly programs with tracks from top producers like Kromestar, Coki, Skream, and Benga, along with loads of new material on those coveted pieces of disposable vinyl called dubplates. With credentials that are already impressive, Rinse 09 is a strong addition to N-Type’s already-strong CV—if dubstep pioneers were the type to have CVs. (Kode9, a faculty member at the University of East London, certainly is.) N-Type shows a predilection for dubstep’s dark, propulsive roots on this mix, but he also shows an enthusiasm for juicier and more bizarre elements that are emerging as dubstep grows internationally and becomes increasingly harder to nail down.

Rinse: 09 opens rather portentously, with a sample of a man giving a lesson on the likes of the “Badman” (which include “the best clothes,” “the best cars,” and “the best music”), his voice soon giving way to vapors of wobbly subsonic bass. From there, it’s all gastrointestinal bass rumblings, snapper-jaw snares, and dub-tinged synths from the likes of the Others, Benga, and Skream, along with more funky selections from LD. N-Type deftly mixes in some exceptional, varied elements: the steamy quasi-tribal beat of “King of Kong”; the feverish electronics and pulsating nuclear meltdown alarm of “Rhythm”; the tense jungle inflections of “Burning Up.” But the unrelenting grooves are what carry this mix from start to finish. To put it May’s way: these 34 tracks toast each other. They bump and grind with each other. They pogo together. Never letting up, Rinse: 09 makes one giant banger out of dozens of bangers.

For fans of Burial’s transcendent vibes, Rinse 09‘s sleek toughness might bring to mind the distasteful image of bros in North Face jackets and baseball caps surreptitiously puffing a blunt in a darkened club. But let’s just say that if these tracks were being mixed live, adherents to the heavy grooves of Dub Police would have good cause to demand at least one crowd-pleasing rewind.