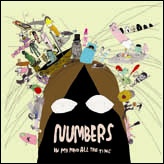 In My Mind All the Time

3:58pm – I’m totally psyched about the Numbers! I ordered their latest album, In My Mind All the Time, almost two weeks ago and finally it arrived today. Anyway, enough yappity yap yap. Let’s pop this baby into the system and brace ourselves for funky dance punk magic…

4:02pm – Dude, the Numbers make me wanna flail like whoa-baby! I’m out of my chair and stomping my feet. Beats, goofy call-response chanting, and guitar-base hookery. Check out the great baseline on “Drunk with Pain.”

4:05pm – Hmmm… the Numbers don’t get too complicated, do they? Granted, they’re a three-piece: guitar/vocals, base/vocals, drums/vocals. However, simple music can be complicated; talented song-writers can overcome the limitations of the three-piece format with creative arrangements. Unfortunately, the Numbers are not talented songwriters. Basically, the Numbers write one hook (either guitar or bass), drop in some percussion, chant some words over top, and … that’s it! The songs don’t go anywhere. I feel like I’m not describing this adequately. Gimme a minute to think…

4:06pm – Alright, here’s how you write a Numbers song. Ready? The percussion goes “Bop, bop, boppity bop. Bop, bop, boppity bop.” Next, the bass goes “Doo doo do do. Doo doo doowaaa!” Third, you lay down some guitar bleeps, like “Beep. Bleep bleep. Beep.” Finally, you start chanting, “I can do anything! I want!” Repeat for two minutes.

4:12pm – Hold up! I swear that I’ve heard this song before. “We’re Numbers” sounds remarkably like … uhm … the LAST SIX SONGS! This formula (one hook, one beat, goofy chanting) was novel for about ten minutes. Now, I’m just pissed.

4:25pm – Silence? Twenty-five minutes and the album’s already over! I paid full-album price for your EP-length effort? Not only do I feel scammed, I’m too poor to support the starving artists who’re actually producing (_good_) whole albums.

Frequently, the Numbers write sweet base-hooks and guitar-lines (especially “Drunk With Pain”). Sometimes, they layer different rhythms atop one another, producing an interesting interplay (“Hot Fire,” for example). Often, the Numbers achieve “entertaining” and “enjoyable.” Never, however, do the Numbers write an actual song. Every track sounds like its first twenty seconds; once the band introduces the basic elements, they simply repeat until the track ends. This simple, formulaic approach to songwriting yields a short and boring album.