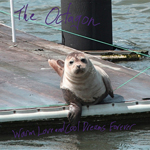 Put together an expert on Chinese underground culture who wrote a book that made the bestseller list in Singapore, the amazing touring drummer for Dirty Projectors, and a Williamsburg bassist who calls himself the Bunny, and what do you get? Guided by Voices, apparently—or at least a rough approximation of Guided by Voices with some severe punk revival and grunge overtones. While Robert Pollard has been off high-kicking whatever he high-kicks nowadays, a band called the Octagon recorded Warm Love and Cool Dreams Forever, a marketably, lovably lo-fi record under the tutelage of Bee Thousand (1994). It’s a mystery why more young bands haven’t gone this route in developing their image. After a couple years of “lo-fi” records produced as if the moniker is an excuse to sound purposefully difficult or off—that is to say, with obligatory incongruities in sound (clear vocals and distorted guitars as opposed to a consistent layer of fuzz); fake DIY basically—a consistently produced album inspired by a band every indie kid knows well is a welcome development. This is lo-fi as nostalgic point of entry, not as raison d’etre.

So it is with highest compliments that I describe opening track “Suicide Kings” as like a lost tape from the Alien Lanes (1996) sessions: thin, reedy guitars, abstract lyrics in the second person, surprising vocal flourishes shining through a palpable haze, and an accomplished, seemingly extemporaneous instrumental segment. It’s a monument to precision in dishevelment and the record’s obvious first single. But by the third or fourth track, aggressive guitar attacks and resonant bass lines gain focus; while “Suicide Kings” is underpin by its lithe instrumentation and complex structure, “Cross Tops” and “Swindler Minnows” lean harder into louder, hardcore vocal deliveries and simpler melodies accompanied by thicker backing tracks, reminiscent of the Dead Kennedys more than GBV. One can easily come away thinking that the Pollard-esque opener was a feint.

Or not entirely, looking at the track listing: Warm Love‘s sixteen songs range between 90 seconds and three-and-some minutes while weaker, longer tracks like “Stop Snitchin’” devolve into two-minute ravers with simplicity and sloppiness but without a proper pop backbone holding it all together. Others just mystify; like, what exactly are they going for in “Loulou,” a dirge-like jam on the tonic? If there’s anything glaring over time, besides the obvious artistic influences, it’s the album’s lack of any trenchant melody—but c’mon, Pollard himself has barely been able to top the highlights from the above-mentioned records and he’s had about twenty tracklists’ worth of opportunities.

In the end, Warm Love is saved by a series of tiny surprises: an unexpected chord progression into the bright major chorus of “Hound Adams”; the chanting in “Clew Haywood”; the free jazz buildup to “To the Flame”; the horns in “Buffalo”; the light, jazzy drumming in “Charles Lavender”; and, finally, the tempo change in “Revolution.” Perhaps a change in perspective is warranted. If one considers the Octagon as an art-punk band that flaunts and subverts influences and Warm Love a record that prioritizes atmosphere and ambience, the slow pacing and lack of bubblegum start to make more sense; the “surprises” gain importance. Just because I want to hear another “I Am a Tree” doesn’t mean this is the group to make that happen. And so, despite starting off on a well-worn path, the Octagon manages to make something new and refreshing within familiar constraints. For an act like this at a time like now, that’s not half bad.