Other Records by Odd Nosdam 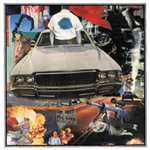 As Anticon’s resident Vangelis whitebeard, Odd Nosdam’s not known so much for compositional bravura as he is for his mystic wealth of blissed-out, can-I-take-you-higher glittering drone-gems, loops of fuzz and vinyl crackle pulsing in the veins of his synth waves. Unlike the ambient coven that such properties would seem to place him in, Nosdam’s got a background that some might dare to call “hip-hop,” so his collagist scrapbook’s a bit more expansive and colorful, and his instrumentals occasionally develop enough rhythm to become what the daring call “beats.”

Few talk about Nosdam’s drums because, well, his drums sound brain-damaged and gimpy. The utterly notable exception to this on Burner is “11th Ave. Freakout Pt. 2,” which puts away the limping hits for Odd’s Keyser Soze stride, a booming drum march straight out of Explosions in the Sky’s “How to Build with a Post-Rock Drum Fill.” That’s a tract that really should exist. Mike Patton and Why harmonize somehow beautifully over a fluid key line, and the drums cut out in the middle for acoustic guitar and animal echoes and a midi-choir, a breath that’s the most weirdly gorgeous half-minute of 2005 music yet. In fact, “11th Ave. Freakout Pt. 2” so completely trumps anything on Fog’s 10th Ave. Freakout (2005), Broder should have served Nosdam a cease-and-desist order, or at least refused to help out on the pretty six-minute sprawl of “Small Mr. Man Pants.”

Oh, yes, the sprawl. “11th Ave. Freakout Pt. 2” is crucial to Burner outside of just being awesome in and of itself. After the great static-organ-and-sound-bites opener “Untitled One” (the last minute of which offers the album’s #2 highlight), the record starts to run itself into a rut with the pleasant yet somewhat nebulous bulks of “Small Mr. Man Pants” and “Untitled Two.” Pt. 1 of the “Freakout” could be a GYBE interlude, so its successor brings a refreshing air of, what’s this, “songwriting,” and it works as the album’s crest, the height of its musical parabola. No, “Clouded” doesn’t really sound like cLOUDDEAD; with Liz Housdon’s soft coos bobbing atop a shifting throb, it sounds like a 2 ½ minute wake to the swell of “11th Ave. Freakout Pt. 2.”

“Clouded” is also an obvious segue (like this sentence) into the Jessica Bailiff-fronted “Untitled Three,” a new-New Age number similar to Boom Bip’s rather horrid “The Matter (Of Our Discussion)” with Nina Nastasia. “Untitled Three” is a little better, though. Actually, that’s a comparison that could be made between Burner and Bip’s Blue Eyed in the Red Room (2005): similar, but a little better. By the time Nosdam floats things to a close with a Talk Amongst the Trees B-side, it’s clear that the climax was back on track seven.

Excuse my review if it mostly talks about the same parts and sounds mentioned by P. Fork’s Mr. Brian Howe, and if the digits are mostly similar, but that’s because those are mostly all the parts and sounds worth talking about (or at least mostly remembered), and the digits are appropriate enough. And God forgive me if I can’t think up an adjective besides the Insound-ready “hypnotic” to sum up Anticon’s solid electronica entry into a year with sublime releases from Eluvium and Keith Fullerton Whitman.