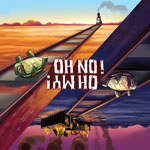 When self-released bands get hype, that crazy, mind-blowing, Dear God, Best Album Ever type of hype, a bit of faith is restored in the indieverse. We gather ‘round the DIY-pole, weave colorful strings of blogged information, and dance-by-typing to figure out just who the hell they sound like, who they don’t, what they look like, what those lyrics are all about, are they still selling it out of their basement? etc. etc., and then the moment passes, and then I wake up somewhere between 6 and 12 months later and realize that I could not care less about Clap Your Hands Say Yeah or The Loon. Those two records, while interesting and occasionally compelling, now seem like products of a past time (a whole 4 months ago), a time that Oh No! Oh My!’s album marks as officially closed.

Now, I used to like Chuck Klosterman, and if I was him right now I would come up with some sort of clever title for this period of the mid-oughts, where being original became so impossible that wearing your influences on your sleeve became the new originality, drowned in irony, of course, since we all know by now that there is no individuality. But even irony itself was no longer ironic, so these bands were praised for their “earnestness.” This time will be forever known as “The Big Wink.” But I don’t like Klosterman anymore, and that wouldn’t be an accurate assessment of many bands. But it wouldn’t be that far off.

Believe it or not, my hate isn’t backlash. I loved those records the first time I heard them, and I like them now. I was swept up in the CYHSY and Tapes ‘N’ Tapes hype-machines, and I refuse to apologize for it. I also loved The Boy Least Likely To. Separating music from “hype” is meaningless to me, since ultimately that is way that “scene” music (if I can use such a hopelessly vague term) is experienced. In the two year period of The Big Wink, if we were to call it that, which we’re not, a lot of people seemed to be searching. I was searching, too, in a post-2004 “where is music now?” type of funk, wondering about post-you-know-who but also about other things in my life: post-college, moving back to my hometown, then leaving for grad school, a challenging off-and-on relationship. Those three albums especially, celebrated for their DIY values, meant something to me, and to a lot of other people, garnering near-universal acclaim.

Which all makes me wonder, why not Oh No! Oh My!? Again, I’m not convinced it’s the music, just as I’m not convinced that it was the music that had anything to do with our other recent success stories. It’s not the music, which is above average, and shows originality in the face of influence-worship. It had significant buzz, you could order their CD-R from the website (DIY!), and the songs are good if not completely obvious tributes to some of their favorite bands. So why I am upset? Because when it becomes clear that a band like Oh No! Oh My! won’t make it and the a band like CYHSY probably will it is a reminder of the way that taste is fickle and the Internet is so very, very, fast. Ultimately, the story of this album is a story about the way we devour the shit out of music. This band was chewed up and spit out sometime in December, in all likelihood, and their distribution deal and wide release this week probably sparks more confusion than excitement. As one downloader posted: “why is this so popular right now? This has been out for awhile, am i missing something?”

Well, not too much. Like my qualms with these aforementioned “dig my influences” buzzworthy records, this release leans far too heavily on the bands that these guys like. The Robot Ate Me, where the name comes from, but also the likes of the Shins, Magnetic Fields, The Boy Least Likely To, Modest Mouse, and digital Bright Eyes. While original, the band doesn’t synthesize these influences as much as replicate them over various tracks, creating more mix-tape than atmosphere or setting. Still, like any good mix tape, it works.

“Walk in the Park,” by far this album’s standout track, was jumping around blogs as long ago as November 2005, rightfully hailed as indie-pop perfection. It has the “ba-ba” chorus, the flute, the sound that makes rays of pure sunshine shoot out of your optical drive. But not content to be pure sugar, the band adds a twist-of-fate conclusion: “Nice day for a walk in the dark / Nice day for a drive-by shooting.” Oh, right in the gut! The sunshine, the gunfire, the whole thing as flashy as Miami Vice and as pure as Sesame Street. Damn good stuff.

Another standout is “Lisa, Let’s Make Love (It’s Okay),” which could have appeared on 69 Love Songs. It has the requisite banjo and more complimentary flute, and the tale of depressed little Lisa is told with such bald, relatable honesty that it is hard not to smile. Lisa has “ribbons and curls,” and she sits in the back of the bus with the boys who play poker, and this type of scene-setting, while obvious, remains evocative. Of course, sometimes they reach for those “big images,” and occasionally succeed, like in “I Have No Sister,” where the protagonists ride their bicycles into the ocean.

Inexplicably, the album features two tracks of one line repeated over and over. “Reeks and Seeks” takes the line “my mind it reeks and seeks all night,” occasionally replacing the pronoun “my” with some others, and slowly adding layers adding a fuzzy guitar riff at the midpoint in a lame attempt at climax. It sounds like a Modest Mouse outtake, and fails even as that. The album closes with “Women are Born in Love,” a hand-clap, camp-fire sing-a-long, which is easy enough to remember because it is just the title repeated over and over again.

While I wish all the success to Oh No! Oh My!, it seems anticlimactic for a band with such great hype in 2005 to land this moderate record when few seem to care anymore. What perhaps should have landed them on the stage at a major event, they’ll likely remain busking the street on the way into the venue. The internet moves fast, and the Big Wink just came and went.