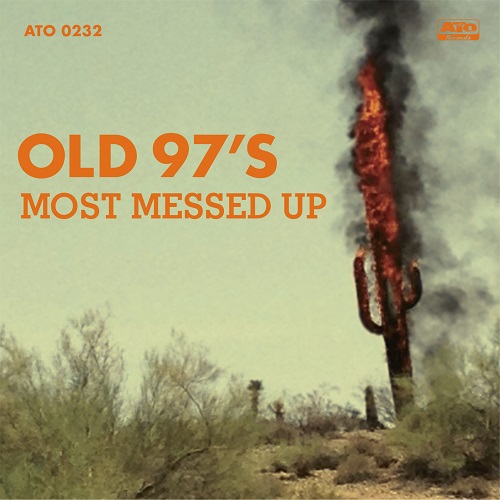 “I’m gonna play my guitar ‘til my fingers fall off / Sing ‘til my voice is gone,” Rhett Miller begins on the song “Wasted”; “They might think I’ve wasted my life / they’re wrong.” And thus we have the general conceit of Most Messed Up, the Old 97’s’ tenth studio album in the twenty years since their 1994 debut Hitchhike to Rhome. It’s a milestone, one these boys are clearly ready to celebrate—with some truth-telling, some yarn-spinning, and whole lot of alcohol. While songs like “Wasted” are colored by swagger, others offer caveats: “You should know the truth / It’s both a blast and a bore.” The Old 97’s are the epitome of a workhorse band: glimmers of mainstream success with no breakout, a solid fan base comprised of everyone from casually dorky high school girls (yours truly in the Satellite Rides [2001] era) to fortysomething rockabilly dads, and a relentless work ethic—constant touring, accompanied by unfailing positivity in the face of stingy promoters, uninhabitable dressing rooms and the kind of suffocating togetherness that has spelled the end for so many bands short on tenacity.

Most Messed Up, then, is about half cathartic culmination of years of toiling away with the same dudes, in the same tour buses, and on the same stages, and about half your standard Old 97’s album. Perhaps because the Old 97’s are a band that takes music so seriously as a full time job, they also value consistency over everything else; while some of Most Messed Up definitely goes out on a limb, it isn’t long before it edges back into safer territory. This album continues in the tradition of witty, melodic, rollicking Old 97’s records, but also offers a measure of truly interesting insight and atmosphere, making it a must-listen in the canon of rock music about rock musicians.

The record kicks off right with “Longer Than You’ve Been Alive,” a fantastic song, band manifesto, and clear labor of love for the band’s main songwriter and frontman Rhett Miller. “Longer Than You’ve Been Alive” vacillates between celebration and explanation, and takes care to temper the truth with proper respect for the magic of rock ‘n’ roll. It also features some of Miller’s greatest lines in years: “Now you just do it ‘cause it’s what you do,” he shrugs, before winking, “They throw underwear instead of money at you.” And when it comes to inter-band relationships, feelings are mixed: “Love is a marathon, sometimes you puke.” But best of all is Miller’s no-regrets summation of his risk-taking youth: “I’ve jumped off of risers I should not have climbed.”

In my review of Miller’s 2012 solo record, The Dreamer, I made a point of stating that Rhett Miller is not cool, to the point that his uncool-ness actually defines him and his band. And it remains true—Miller has always been an interesting frontman. Charismatic, sexy, and full of swagger at times, he also possesses an earnest, down-to-earth quality that reveals itself everywhere: interviews, onstage, and even in his lyrics. It’s like he knows he has all the right ingredients for rock stardom, but he can’t play it straight. He might dance around the stage like Mick Jagger, but afterwards he’ll grin sheepishly at the crowd like we’re a group of close friends, and we all know who he really is. While I think the Old 97’s’ lack of mainstream popularity is more due to their genre than anything else, Miller’s self-awareness also strikes me as a legitimate stumbling block to stadium-tour fame.

And yes, Most Messed Up would actually be more appropriately titled Most Self-Aware, as this is a band that knows at this point exactly who they are, where they’ve been, and the road that stretches out in front of them—and they know no other way but to tell the truth about themselves. Miller tries to lose himself in playing his role, though his earnestness is always interjecting. Take a line from “Longer Than You’ve Been Alive,” which begins: “Speaking of which there has been alcohol / Oceans and oceans but that isn’t all / Mountains of weed, a handful of pills / None of the hard stuff that shit kills.” Even at his most hedonistic, Miller is careful to remind his fans that he and his bandmates would never do hard drugs. As the diary of a working band, Mötley Crüe’s The Dirt this is not.

“Longer Than You’ve Been Alive” acts as the album’s thesis statement, and the best parts of Most Messed Up support it with insight and humor, like the fuck-the-man anthem “Wasted,” romance-on-the-road song “This is the Ballad,” and classic 97’s barnburner “Nashville,” which ties with “Most Messed Up” for most profane Old 97’s song (the number of “fucks” on Most Messed Up actually became a point of contention for the band during recording). But it’s the closing two songs on the record that are probably its best, in that they continue on the theme but take it darker, bluesier, and rowdier. This is at least partially due to the presence of the Replacements’ Tommy Stinson, who shows up here on guitar (a role he took on when he got Rhett Miller so drunk during a Guns N Roses show that he fell down and broke his wrist). Both “Intervention” and “Most Messed Up” have a whiff of the ‘Mats about them, the former a creeping, clattering shuffle and the latter a swaggering, Jon Spencer-esque finale. Miller sounds more out of his head than ever before and manages twang convincingly, as the music grinds to a halt: “I am the most messed-up motherfucker in this town.” It’s most certainly not a true statement, no matter the town, but it’s really not meant to be. What’s important is how different this sound is for this band. By being completely un-Old 97’s like, “Most Messed Up” becomes the best Old 97’s track in years.

Of course, it would be pretty tricky to maintain that kind of high throughout a forty-minute record, and Most Messed Up drags a bit on the off-topic songs. It’s hard to resist the persistent chug of “Give It Time” and the giddy “Let’s Get Drunk and Get It On,” but they don’t feel totally necessary. “Guadalajara,” in particular, is a weak spot—its island vacation premise feels lifted from another band entirely, its melody borrowed from Rhett Miller’s song “Point Shirley,” a standout from 2002’s The Instigator. And while I believe Murry Hammond to be way more talented than your average bassist, his contribution “The Ex of All You See” is out of place as well. The Old 97’s are frustratingly loyal to the twelve-track album, and it’s a bit of a shame. With a little editing, we could have a stone-cold classic on our hands, instead of their usual very good record.

That said, Most Messed Up still succeeds in its goal of providing a realistic portrait of a working band, albeit one that ‘s made up of smart, grounded, slightly square, salt-of-the-earth dudes. It feels like a gift offered up to loyal fans, one that’s taken a lot of love to make. And it’s true that it doesn’t quite come together (Rhett Miller has never been a master of the concept album, partly due to his tendency to love songs as filler), but at its best, Most Messed Up is not just a diary, but an assertion of investment: this is a band that’s defiantly soldiering on, out of love and duty, who refuses to phone it in. It might retain the sheen of sweat, but it’s perhaps their most joyful outing, through and through, in quite a while. Rock ’n’ roll, for a band like the Old 97’s, is not an easy career path. But they’ve had, as Miller estimates in “Longer,” “Twenty good years of about twenty-five.” And that’s a number that’s pretty hard to beat—in any band, or any career.