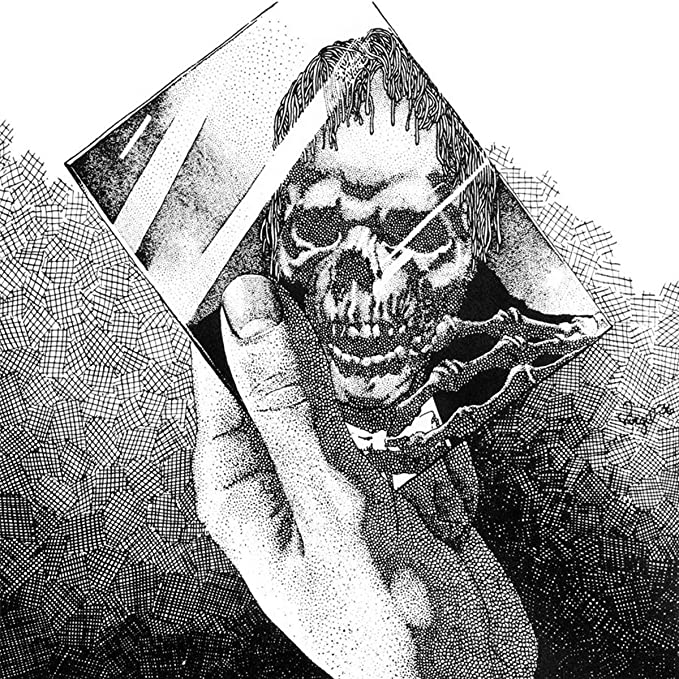 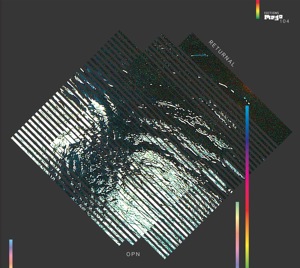 Library music can mean several things. To some, it’s the art of sneaking a headphone up inside your sleeve and putting hand to ear at the Silence table. To others, it means booking out that beloved Holst CD only to get home and find out some fucker’s scratched it. To those who are a little more footloose, though, it’s the practice whereby you gorge yourself on electronic stock music until you can replicate the Cold War in a flash—or rather Cold War memories in a flash. No one wants a playlist made of Duck & Cover commercials, but if someone were to isolate the laboratory drones that makes everyone automatically feel seven again…well, that’s the closest we’ll get to time travel right there. Daniel Lopatin has been time machine-building for three years now—the majority of his output on cassette, of course—but on fifth album Returnal it seems he’s finally cracked it, achieving the sonic equivalent of the Back to the Future lightning strike. If Christopher Lloyd got stoned in the fifties this is how the future could have sounded: luscious, nuclear, intelligent. It could even alter the course of history altogether and stop him signing on to make Suburban Commando.

Lopatin’s tactic of splitting his keyboards and letting the lines flow around you like lasers remains his star attraction, but this time if you want the full effect you’ll have to overcome the Oneohtrix safety device he’s installed to deter any scenesters. Lopatin never makes straightforward ambient records, and, though it’s outwardly as pacifying as his previous four works, Returnal comes armed with one of the most jarring openers I’ve ever seen on a drone album. Perhaps it represents the speed you have to break in order to slip back into the past, but even so “Nil Admirari” seems a little chaotic for 300,000 kilometers a second. This is library music for when the library’s on fire; windows warping as the safety glass bursts and turns E-K into confetti. Sounding vaguely like the Superman theme gone wrong, the track shakes a handful of broken-up space capsules, drums burning up in the atmosphere. Make it through that and you deserve a reward. You get it on “Describing Bodies,” which restores things to Lopatin’s noble synth glow. Now this is what downed astronauts want to hear: everything calm, shiny, and glacial. It’s the kind of crystal acid trip you wish you could’ve had instead of freaking out to that fruit bowl.

These warm gauzes form the crux of Returnal, and see Oneohtrix sculpting his succulent drones to hypnotize the fuck out of everyone (seems perverse, but then what do you expect from a man named after a radio frequency he once imagined). The breaks on Returnal are almost semi-conscious—the odd neon breeze here, 5% more New Age squalling there—but they still keep his sound as involving as ever, inviting you to tape the curtains shut and ask the world to fuck off while you listen. On “Where Does Time Go” he manipulates a French siren into a laser DNA demonstration, strands interlacing slowly against a segueing carpet of stars. It manages to hold your attention without once changing key, and flows all too ironically into “Ouroboros,” where you get to meet Xela in his hippie phase (all calm and pearly loveliness, not one iota of the Underworld). Elsewhere there’s deep tubes and semi-automatic panpipes (the title track), and plenty of emotions forever out of reach, gently half-teasing you, like a dream.

Perhaps the most humane action Lopatin’s performed on Returnal is to trim it, keeping things tight at a prompt forty minutes. Sure, you’d like to stay in the safe space forever, drifting through corridors of buildings you once daydreamed in, corridors that are now probably just flats, but in reality, sadly, the bus comes, in this case with feisty closer “Preyouandi”: another trip back into that big black hole. Now that’s what I call a Machiavellian bus; one can only think of the state of Massachusetts’ public transport. As Lopatin gets ready to drop back to Earth he dunks you in a vat of IDM, like hearing an old Proem track die of a spider bite. Its rumpled texture only echoes the minefield of the first track, but it brings a sense of closure to Returnal, tying things off in a bow. Whether that completes Oneohtrix Point Never’s rite of passage I don’t know—they say the universe is doughnut shaped, after all—but it does mean he’s looking at the bigger picture, so stand by for more twists next year. Who knows where his time machine will take him then. He may have moved from cassette onto minidisc.