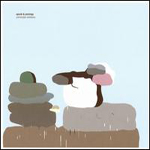 Commuter Anthems sounds like a bunch of half-finished thoughts, like the kind you indulge in while actually commuting before something out the window or somebody on the train distracts you. It’s a pretty journey, certainly, though at times it can feel a bit anxious, like you’ve been standing for too many minutes waiting for the train to arrive in the first place. It’s the kind of album that has a decent idea or concept but no real focus; the result is a fairly homogenous selection of really pretty numbers but no overall cohesion — where the moments amount to more than the whole.

That problem shouldn’t keep you from checking the album out, necessarily; I just don’t want to make more out of the beauty than it merits. Because you’ll recognize the beauty both for its form (somewhere between the Books and Clue to Kalo) and its sound. Because it sounds like pastiche, a murmured whisper of all sorts of different pretty melodies grafted onto the same whispy, skeletal framework. The title track is all Neutral Milk Hotel horns echoing a twee band’s clever vocalization. “Silverlake” is ambient country. “Wrong Place Right Time” is buzzing ambience that aims for Jeck but doesn’t make much of the journey there.

The duo — Aaron Jennings and Eivind Opsvik — is best when they ignore the obvious melodies in favor of sounds. “Lorinda Sea” folds out layers of shifting orchestration that forms melodies out of panned instrument notes. The production is stellar, allowing you to infer implied melodies by connecting the dots between notes from entirely different instruments. “Port Authority” starts a bit slow but winds its way into a proper jazz track fused with wonderful programmed elements. And, in fact, the second half of the album betrays their jazz leanings (and especially Opsvik’s upright bass) far more clearly than the first. But by that point the album tends to morph into a Medeski, Martin & Wood-type affair. This isn’t to say “bad” necessarily; it’s just more “eh.”

So Commuter Anthems has its spots of greatness. It’s just unfortunate that the beautiful composition of the former half isn’t complemented by the edge of the second half and that the spunk of the second half isn’t conveyed through more eloquent melodies like those found in the first. You can hear a phenomenal album in that juxtaposition, but it’s an album I’m imagining, not the one that sits in front of me on the table.