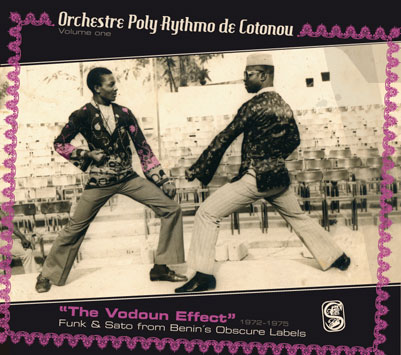 The first moments of “The Vodoun Effect” 1972-1975 Funk & Sato from Benin´s Obscure Labels are entirely unexpected, foreshadowing the sweaty, spiritual voodoo-Latin-funk hybrid to come. The intro has a twanging Spaghetti Western guitar that gives way to the chanting and coordinated grunts of the musicians, referencing to salsa and samba. Then, percussion and drums break into Latin-tinged madness, linking with a bouncy bass and the lead guitar’s yearning two-chord ostinato, the singer languidly flailing up and down the octave in his casually rich voice. Those sixty seconds alone are enough to leave a yovo like me speechless.

“The Vodoun Effect” is a project of Analog Africa’s Samy Ben Redjeb, who scoured the coastal sliver of Benin for unreleased Orchestre Poly-Rhythmo recordings dating back to the golden age of West Africa’s nightclub scene, the decade when this former French colony underwent a Marxist coup and got a name change. After his sojourn to Benin, Redjeb came up with a whopping 500 recordings that he has distilled into two collections. The fourteen recordings on this first volume are full of their own unique soul: Set down on low-budget reel-to-reels in living room studios by local producers around the capital, Porto Novo, and the bustling port city of Cotonou, in violation of an exclusive contract with the label Albarika Store, these tracks hardly exceeded 1,000 pressings when released in their day. While Volume 2 is slated to showcase Albarika recordings, this collection is the best of the band’s sparely produced, home-spun output—here only “Mawa Mon Nou Mio” has been distributed outside Benin before. Featuring a 44-page booklet of photos and album covers from Benin’s ’70s music scene, this is an intimate look into one of West Africa’s most remarkable and unique bands.

On “The Vodoun Effect”, Latin mashes up with James Brown funk, bringing together Afro-Cuban percussion, anthemic horn refrains, scrappy sax solos, lingering guitar licks, convivial yells and lyrics belted in French as well as the tribal language of Fon. But despite these sonic touchpoints, if Orchestre Poly-Rythmo de Cotonou comes out of anything, it’s the voodoo tradition. The region has long been the homeland of Vodoun, the belief in the twin sibling deities Mawu and Lisa, a host of spirits who govern life and invigorating tribal rituals. According to Analong Africa, Orchestre Poly-Rythmo often employed Sato, a Vodoun rhythm usually performed with a giant communal drum. On this compilation spiritual transcendence is not as explicit as funk to the untrained ear, but the deep rhythms, skulking guitars and wavering vocal lines give the tracks a uniquely trance-like quality. And evidently, the gasp-inducing “Mi Ni Non Kpo,” with a whipping beat and a punctuating, psychedelic guitar ostinato that lingers with echo, is a contemporary take on the Sakpata. Channeling the powers of the fearsome god Sakpata, who purveys over the earth and spreads disease, “Mi Ni Non Kpo” isn’t just a trippy way to boogie down—if the energy is right on the dance floor, it might very well protect you and your dance partner from smallpox.

With the warm vinyl crackle somewhat preserved, there is a palpable sense of raw, relaxed, deeply inspired energy on this compilation. That it would be over three decades before anybody outside Benin could easily get a hold of this music is a serious shame, but at least this fact will help make the experience of listening that much more special.