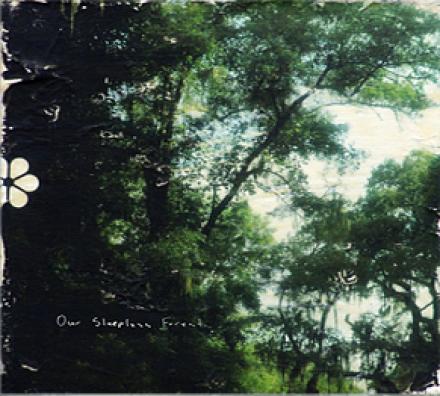 Funny thing: Our Sleepless Forest drops from the sky without more than a shred of context—a paltry bio of its creators (met at school, messed around with various instruments and recording software, released the results to the world), no discography to chart an evolution, no “scenes” or musical collectives with which these three boys from Putney, England, associate. That is, little more than the debut itself, which is fine because: a) it happens all the time, and b) these eight tracks do a better job of outlining the trio’s broad musical tastes and compositional leanings than a press release ever could. A simple Myspace visit would reveal that these chaps lurve Sigur Rós, Gang Gang Dance, Animal Collective, and Stars of the Lid. But only after listening to the album would you realize how much time they’ve spent mulling over what makes these artists tick, internalizing the logic of their structures which the band seamlessly integrates into their experimental, yet highly listenable, sonic mélange.

This is all pretty obvious from the get-go with “Nomads,” the band’s defining statement, which they have kindly provided as a free download. Loping acoustic strums, wind chimes, suspended ambient dust, and deep-bellied tribal drums cohabitate rather blithely until a wailing wall of Branca-esque guitars crashes in tsunami-style, leaving behind only bits of debris and beautiful white noise. The band matches the opener’s grandiosity on “White Bird,” where swooning orchestral flourishes flap like a heavy blanket against the enveloping ambient fog, in a way much akin to the heartbeat effect of Sigur Rós’ “Starálfur,” from Ágætis Byrjun (1999).

The album’s second half concerns itself less with the seismic dynamic shifts of the first half and more with creating its own self-contained environment—pretty much the textbook definition of ambient music. But even in its most formless state, this ain’t music that sits on its laurels. “Afraid of You” pits the jagged transistor snow of Tim Hecker against a heaven-bound stairwell of Eluvium-esque organ spirals, the former invariably piercing through the gossamer shield of the latter. And “The Clarion,” with its impenetrable malaise of moaning guitars and industrial clatter, harbingers the end days à la M83’s most dirge-y moments.

In 43 minutes Our Sleepless Forest cover a shitload of ground—post-rock, free folk, classical, ambient, shoegaze—but never with a flippant, connect-the-dots attitude, thanks to the boys’ highly immersive approach. True, they go to great lengths in harvesting the fruit of others’ innovations, but they’ve also made serious headway in challenging preconceived notions of the compatibility and versatility of the genres they so lovingly treat here. They won’t coin a slick new genre tag anytime soon; rather, they point to the futility of such a practice.