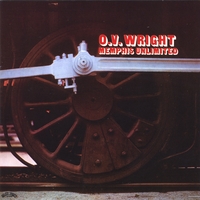 It’s easy to miss how good this album is. Though it captures one of soul’s great voices and one of its best backing bands at their peak, its strengths are subtle. Eschewing the increasing proto-disco and funk theatrics of his contemporaries, Wright and producer Willie Mitchell instead offer two sides of straight-up soul songs. No muss, no fuss. Memphis Unlimited was already a throwback upon its release in 1973, and this renunciation of contemporary trends in soul is reflected in the record’s restraint. Though undoubtedly a southern soul singer, Wright abstains from the histrionic cat-calling of Wilson Pickett and the band’s controlled fire avoids the in-the-red grease of the Stax/Volt horns. What emerges instead is soul with the precision of a miniaturist, as perfect as a Mozart sonata.

The apparent contradictions between subtlety and impact, restraint and passion are wiped away with one listen to the gravel-soaked pain in Wright’s voice. Like so many of his contemporaries, Wright had a background in gospel, and emerged with an aching, ancient tone both gruff and vulnerable. It’s not that he doesn’t feel with the depth of an Otis Redding, it’s that he’s not bristling against the boundaries of the form like Marvin Gaye or James Brown. Memphis Unlimited was released during a period of massive upheaval for soul labels, producers, and artists. Stax/Volt saw their grip on the R&B chart loosen as Motown moved to LA. By now the Philly sound was in full swing, with Kenny Gamble, Leon Huff, and Thom Bell crafting early disco tracks like “The Love I Lost” and “Love Train.” James Brown’s singles had been in two parts for years and concept albums like What’s Going On (1971) and Superfly (1972) saw the kaleidoscopic, politically conscious vision of their creators barely contained by the forty minute LP.

Into this era of busted idols and disco polemics came Willie Mitchell, who as head honcho and producer was responsible for the Hi Records sound epitomized by Al Green’s classic singles. The delicate, slinking funk was matched by Green’s peerless vocals, which at their best crackle with an impossible combination of raucous lust and devout tenderness. By 1973 Green had overwhelmed the charts with “Tired of Being Alone,” “Let’s Stay Together,” “I’m Still In Love With You,” and more; Mitchell’s in-house band the Hi Rhythm Section were killing it on everything from Ann Peebles’ “I Can’t Stand The Rain” to Syl Johnson’s “Back For a Taste of Your Love.” Though he was producing Wright for an outside label, Mitchell brought the full force of the Hi sound to Memphis Unlimited, including the Memphis horns and his most trusted backup vocal trio of Rhodes, Chalmers, & Rhodes. Amongst all the upheaval of the early ‘70s, Mitchell contained his genius within three or four minute pop songs, trusting to his understated textures to get the job done. Though Al Green’s vocal style was a paradigm breaker, Mitchell’s artists didn’t make conceptually sophisticated, mind-blowing records. They just made sex-soaked barnburners and for a few years they made them better than anyone else.

So Wright is not in the very top tier of soul singers, those who are both brilliant interpreters with top-flight material and innovators who triggered paradigm shifts in soul’s history. No, all he has to offer is twelve superlative songs sung with the pain of the whole world and backed by arguably the best studio band going. “I’ve Been Searching” starts things off with the classic Hi stomp. Between thick horn stabs and deep-as-fuck organ grooves, Wright details the quest for love in a gin-soaked baritone slink that moves effortlessly to an aching falsetto. The upbeat mood—with Wright’s bluesy melancholy as a perpetual counterpoint—continues through the first three tracks until “He’s My Son (Just The Same),” a ballad about a man’s love for his wife’s illegitimate child. In the slower tempo, Wright really opens up; he has one of these tired, been-to-war-and-back voices that wraps the somber subject matter in detailed phrasing and a wide, sad vibrato.

Standouts might include the first single “I’d Rather Be (Blind Cripple And Crazy)” and the yearning “Memory Blues” if the album didn’t maintain a similarly high standard throughout. Wright and Mitchell take their deep-south take on the Hi Sound through strutting funk and bluesy ballads with a relentless mastery of every verse and chorus. This consistency can be a double-edged sword, as a lack of clear highlights and the sameyness of Mitchell’s sound can make the albums he produces seem too easy. The tracks here could often double both for each other and for tracks on I’m Still In Love With You (1972) or Part Time Love (1971), and it’s easy to mistake this reliability as complacency not genius. Wright, however, has a sound all his own, and the apparent ease with which he and Mitchell make heart-firing magic is only a misapprehension of how thoroughly and consistently they bring it.

Memphis Unlimited makes two very slight concessions to changes happening in soul music at the time. The inclusion of “Ghetto Child”—and arguably “He’s My Son (Just The Same)”—marks a rare appearance of socially conscious material in Wright’s catalogue. The LP only contains songs from one set of sessions; rather than cobble together tracks from different singles and sessions as with Wright’s previous records, Memphis Unlimited was conceived of and recorded as a complete album. Perhaps it’s in deference to this cohesiveness that Reel Music, who reissued the record, decided not to include any bonus material from the sessions or from singles on the various labels that were releasing Wright’s music in the seventies. I suspect rather that since the record has been out of print for decades (and never before issued on CD), there is no need to justify an unnecessary release with supplemental material. As it stands, we are left with only the original LP in all its glory, and for all the illuminating effects or completist appeal of bonus tracks the experience of listening to the album undiluted is worth the sacrifice.

Memphis Unlimited is as good as a record can be without being an outright classic. Wright hovers just below the top ten interpreters of soul music in the canon, and his producer is content to perfect the soul format without expanding it. As a result, the achievement of Memphis Unlimited is not as immediately discernible as more groundbreaking work from the period. Repeated listening, however, reveals track after track of intricate craft and understated brilliance. Essential for anyone with more than a fleeting interest in soul, Memphis Unlimited stands as a record of a deep soul giant at his peak and is a logical next step for those who have exhausted the Al Green discography.