Other Records by Oxford Collapse 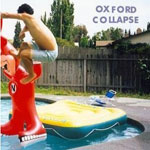 I have no reason to feel protective of this band, but as I listened to this album I found myself pondering academically some of the same questions that might preoccupy a worried mother on prom night. Is it too soon? Are they ready? Will they be themselves? They are, after all, a young band. It’s only been two years since their debut, Some Wilderness, and they’ve experienced some changes. That can be hard on a child. They switched bassists before 2005’s A Good Ground, and now they’ve been invited to their first big dance. That’s right. Oxford Collapse put on their powder blue tux, kissed mom (Kanine Records) goodbye, and drove on over to Sub Pop for their newest release, Remember the Night Parties. And this, more than any other step in their formative years, prompts the question above.

There’s no question that Oxford Collapse, like an awkward teenager, hasn’t figured out exactly what they are, and the added pressures of a larger label release have caught them slightly off guard. One wonders if they haven’t taken measures to conform. Their album title, for example, sounds like an Eve 6 song lyric. This may be ironic (and they receive full irony marks for the giant inflatable Noid on the cover), but more likely this is posturing; this is an attempt at overt accessibility; this is a hard edge filed down.

They continue to strike these forced poses throughout the album. The pretentious no-fun build-up of “He’ll Paint While We Play” heralds an arrival replete with an actual drum march, begging the question with hushed intensity: Are you fucking ready, world? We are new and improved! “For the Khakis and the Sweatshirts” and “Return of the Burno” are similarly pointless, the former never picking up steam due to the use of limpid over-serious falsetto choruses, the promise of the latter squandered when the song ends a full five minutes before the chanting, meandering postlude trips and falls down. “Kenny Can’t Afford It” features an unfortunate recurrence of the protracted chant. Who’s the bad influence in their new group of friends that’s telling them that this is a good idea? At first I thought that this was just a little harmless filler, but then it struck me that these songs may be emblematic of the direction in which Oxford Collapse thinks they need to go in order to mature.

This would be a real shame if for no other reason than “Please Visit Your National Parks,” one of my favorite songs of this year. Michael Pace throws his mid-register squeal skyward like a graduation cap when he sings, “You should be standin’ right next to me / Instead of two feet in front of me.” The youthful jubilance of “National Parks” is the best kind of infectious, and, although never matched on the album (or in the OC catalogue for that matter), there are others with a glimmer of its flame. “Loser City” finds Pace describing a wild ass night on the town with wry and brutal wit, “I kissed you sister / And made her cry / Should have dismissed her / Could not decide / There were a couple of times when she said goodbye / Never forever / I watched her try.” The song title “Molasses” is a description of slowly dripping blood after Pace has juvenilely picked at a scab. Each and every enjoyable song on Remember the Night Parties is irresponsible, or goofy, or simplistic; each of them portrays a group of young artists having fun between attempts to become successful.

Oxford Collapse has never been a terribly consistent band. Odds are they’ll never be a terribly consistent band. But A Good Ground had “Proofreading” and Night Parties has “Please Visit Your National Parks,” and if they put out ten more records like these I promise right here and now that I’ll pre-order that greatest hits album. I just hope that’s enough to stop them from being peer pressured into becoming a shitty band. Remember, Oxford Collapse: if you think you need to write songs like that to impress them, then they are not really your friends.