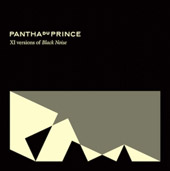 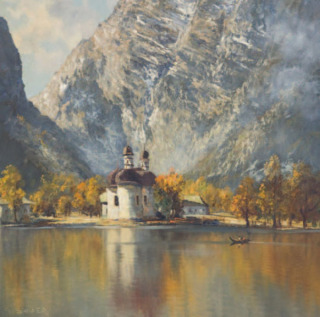 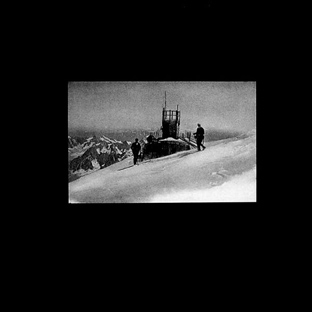 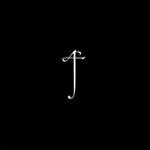 This Bliss is an answer to prayers for dance floor communiqués and 4/4 body politics. Here spins Hendrik Weber, his coincidentally-shared family name more than just a caustic subversion of the white collar hum-drums of Max, his analogue infestations joining other rogue artists like Ricardo Villalobos in necrotizing the fascisms of Detroit Techno and Chicago House. Weber’s a sure-footed cowpoke who tames the frontier between those cities (and also New York, Berlin, Hamburg, and Paris, the routes between which are where much of this material was composed). Afterwards, he’s a starry-eyed facelift who washes this modified geography in a stew of avant-garde noise, Slowdive daydreams, and minimalist-inspired calculus. His stare’s pretty minimal, too; in concerts he’s nonchalant, reserved, involved in the process. This process — this bliss — isn’t about one human funking up other humans; it’s about humans funking together, and as a result Weber’s music won’t give us glory notes or the kinds of tension and release we’ve been trained to expect. Instead it offers stories and politics; it is post-structuralist Lego built on The History of Sexuality at least as much as it is a chance for us to sport our new dancing shoes.

Yes, we just dropped the Foucault bomb. But think about what a dance floor is like. Then reduce Foucault’s voluminous shit to his basic point: power is about relationships, and relationships compose power. Or, check this diagram out: 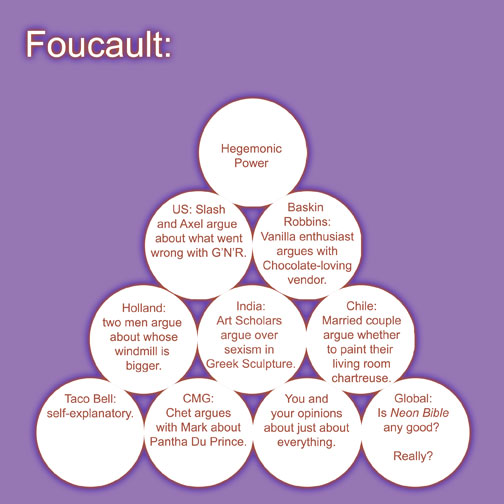 Point being, Foucault’s concept of power is only as complex as the intimate relationships that make it up. So, in our world of “-isms,” incredibly so. But on a dance floor, if you can imagine those “-isms” relegated to the outside world — as Dirty Dancing, the video for “Beat It,” Save the Last Dance, West Side Story, and that movie where Antonio Banderas teaches inner-city school children modern values through the power of dance (that Mark’s friend Jo Chim totally plays Alfre Woodard’s secretary in) have all totally proved is realistic — then you can start to move towards a politics of dance culture, or rather a culture that is political for being apolitical. If you remove those relationships of subordination, which in Pantha du Prince’s language are expressed as house/techno, dance/IDM, inside/outside, and organic/synthetic binaries, but also just as counterintuitive builds that avoid the typical hierarchies of sound and tone through which house and techno have developed — if you can create that hybrid of everything that privileges nothing — you get a party that is about the party rather than a party that services the partiers who have the most money, or the least chest hair, or the best pair of sneakers, or who recognize those hierarchies of sound in the first place. Because (and Villalobos is great at this, too) the point is to excise the “-isms” while leaving the prefixes intact. Celebrate knowledge; get rid of academia. Celebrate race; get rid of racism. Etc. It’s about leveling the playing field so that all desires are equal. In Pantha du Prince’s labyrinth of gorgeous, galloping sound, we are all lost equally, and the only way out is to tear that fucker up. Together.

Weber’s strange funk is a calling card that issues these ideas through process. Follow his streams of digital ooze (this music is as tight as it is drafty) and you’ll never find yourself end where you thought you might. Weber’s sense of momentum is incredibly articulate; he excels with tantalizing phrases and wild changes that build internal tension through the contrast between change and inertia. The bass synth on “White Out” is a consistent pulse that fluctuates between drastic extremes of volume, its peak shocks sending the percussion off in new directions, those new directions quickly bringing the track into a different, equally exciting state. And here each “state” is one juicy, nuanced techno hook that births the next, all somehow staying well within the framework established at the outset. The self-contained twists and turns and endorphin waves of Weber’s Bliss, then, seem far more lithe and sophisticated than your typical techno bliss-out, which treats variations as near-sighted tweaks on a worship music mantra.

What separates Weber from his Villalobos-led colleagues is that they achieve this effect through emphasis on percussion and rhythm. Weber usually pulls it out with everything else — though he’s no slouch with the drum patches — building samples, synths, and sound effects into a woozy treatment that performs the task of all great dance floor music: it’s happy and sad, but you can never really tell which. Sharing Belgian minimalist Wim Mertens’ passion for overarching melodies, Weber composes this music, rather than sequencing it; “Saturn Strobe” is both Roger Skempton cover and vindication of sweeping strings in techno. Weber lets the orchestra glide smoothly — without bathos — and parses out the movements into small dividends that foot rather than drown the track’s inspired percussive rounds. Even “Moonstruck,” dedicated to pioneer minimalist Terry Riley, retains Mertens’s sense of whimsy, his gift to the minimalist stable. Weber is also brilliant with his sense of space, substituting for boundaries by warping all sorts of playful noise on the outskirts of several tracks. “Florac” begins with what sounds like lightsabers nestling and woodpeckers dueling, a sparse, odd foundation that somehow comes to find itself holding up a bastion of layered, mind-numbing beauty. If the boundaries of the music themselves are eroding, how can we maintain ours?

“Steiner im Flug” is a homage to Werner Herzog’s documentary on Steiner, a ski jumper, and samples the music of Popul Vuh from the film. The song’s a melody crumbling into being, a slow-motion avalanche that serves as resounding proof that any artist who samples needs to sample Popol Vuh (or in El-P’s case with “Scream Phoenix,” at least music that sounds like Popol Vuh). It’s also an instant “buy me” shout-out to the world’s Herzog zealots. But in terms of the artist reference, “Steiner” raises an interesting (if silly) question: is Hendrik Weber subconsciously trying to become the Werner Herzog of dance music? Let that question stand if we say that “Werner Herzog” = an eccentric, self-politicized, philosophically stringent, yet ultimately enjoyable iconoclast (for accessibility is as important a part of the philosophy as the iconoclasm). This contrivance in mind, the misty cultural labyrinth of This Bliss, navigated by means of dream logic and obsessive drive, may well turn out to be Weber’s Aguirre.