Other Records by Papa M 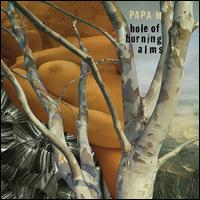 Hole of Burning Alms is a collection of Papa M (aka Dave Pajo, a former member of Slint, Tortoise and, uh, Zwan) singles, many released under the M, Aerial M, or M is the Thirteenth Letter monikers, between 1995 and 2000. For those of us who started listening to Papa M through the excellent 2001 LP Whatever, Mortal, this material comes as something of a surprise. Where Whatever Mortal was an eclectic collection of traditional folk songs and original compositions highlighting Pajo's terrific guitar skills and strong voice, Hole of Burning Alms tends more toward Pajo's post-rock past and features almost no singing.

I should make it clear that this is not a bad thing. The degree of experimentation taken on this album is quite high; on several of the tracks Pajo meshes electronica with the type of folk rock that he had been clearly moving toward and the post-rock climactic builds so common to Godspeed or Explosions in the Sky here are muted and played beautifully on acoustic guitar. The album is also much more lo-fi than some of Pajo's previous work; a few of the tracks consist solely of Pajo playing all of the instruments, and the rest are with a revolving cast of backing musicians.

Album opener "Safeless" is an especially good example of the crescendo. The song begins with a simple guitar line and slow drum beat and builds which builds after a breakdown with the addition of a second guitar and a stronger drum beat. Pajo clearly came a long way from Slint, and there's a lot that the modern post-rockers could learn from the complex, subdued arrangements that Pajo utilizes.

Many of the tracks seem to blend into one another, but there are certainly a few standouts. The breakdown on "Vol de Nuit" about 3:20 in to the song works well in contrast with the crashing guitars that follow. "Mountains have Ears" showcases Pajo's electronic tendencies, but the work is rather minimal and simplistic and doesn't work too well (DIY electronica like this is often ill-advised).

"Last Caress," a cover of the Misfit's classic, is the first song on the album on which Pajo sings and, according to the liner notes, the first time he ever sang for a recording. Although he clearly hadn't mastered it yet, his voice does have the strength and clarity that is put on display on Whatever, Mortal. The more experimental "Travels in Constants" also features Pajo's vocals, but has a very different sound. The first five minutes of the track are electronic dance beats, followed by a four minute section of guitar doodling, followed in turn by a beautiful last section of acoustic guitar and distorted vocals. Both "Up North Kids No.2" and "She Said Yes" have a groove to them and a lighthearted feel that doesn't show up on much of the rest of the album. The inclusion of a 16-minute version of "Turn Turn Turn", sans vocals, seems a bit much, but album closer "Xmas 1997" finishes the record on a strong note. The song manages to incorporate electronic glitch material into Pajo's folk rock better than any of the other songs here.

Of course, this type of album does appeal to a rather select audience. Call it post-folk rock if you like (please do, I really want to coin a term because, you know, there are hardly enough of them), but it's an interesting sound and Pajo does it beautifully. If it was the terrific singing that attracted you to Whatever, Mortal, this may not be the album for you; but if it was Pajo's intricate playing and terrific arrangements, Hole of Burning Alms comes highly recommended.