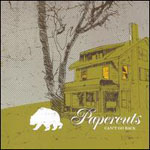 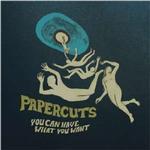 You Can Have What You Want

Jason Robert Quever is a man with connections. Drawing from an apparently large Rolodex of musicians, he rambles up and down the west coast, shuffling the Papercuts lineup as he goes. He’s on Andy Cabic (Vetiver) and Devendra Banhart’s Gnomonsong label, and has collaborated with the likes of Cass McCombs, Casiotone for the Painfully Alone, and Grizzly Bear. Moving in these circles provides Quever with some built-in credibility, which may explain why his deeply unremarkable sound has managed to catch the ear of so many people despite being, well, deeply unremarkable. Papercuts’ latest is not a bad album, or at least not as bad as that last sentence might let on—there is no shocking lack of craft here, no flagrantly stupid ideas. I often find myself thinking “this is a pretty song” or “that’s a nice melodic keyboard run,” but trying to tell one song from another is like telling Wal-Marts apart from the inside.

Let me explain it this way: You Can Have What You Want is like Turn on the Bright Lights (2002) without the drama, without a voice as deep or distinct as Paul Banks’, and without the hooks. Instead of all that, Papercuts opt for a vague, beige production and generally indecipherable lyrics that may or may not be about some kind of futuristic utopia/dystopia. (Since the vocals are too obscured by organ and effects to know for sure, I’m basing this on song titles and internet conjecture.) To be even more exact, where a song like Interpol’s “NYC” has the sweeping gestures and titanic bravado to carry its plodding tempo, Quever’s songs simply don’t; as such, they end up collapsing under the weight of their own arrangements. “Once We Walked In The Sunlight” opens the album with a bevy of whirring keys that leave little room for the rest of the band. The vocal seems so reluctant to pass from one note to the next that it barely goes anywhere, leaving the listener wondering what the massive arrangement is serving. It’s a confusion that, with only one exception, never lets up.

That lone exception is “Future Primitive,” which is both the record’s best and most divergent song. Quever’s nimble melody moves quickly over a bass line that forgoes grounding bloated chord changes to become downright groovy. The song’s paranoid mood is bolstered by a set of lyrics that makes you wish you could hear them on the rest of the album. Quever sings, “We are born to this world / Out on loan from the beyond” in a voice finally able to stand up to the arrangement. Without the fat organs Papercuts sound downright restrained, with mostly just drums, noodling guitar, and tremolo strings joining the bass. It’s tempting to credit Beach House’s Alex Scally—who assisted with the arrangement—with the win here, but he worked on several songs, so who knows.

The sigh of relief that is “Future Primitive” doesn’t last long, however, as the final three songs return to the big keys + big chords formula that plagues the rest of this record. Taken as a whole, these ten songs meander without ever feeling like they have a home or a necessary place that they belong. Quever seems content to place ambience over substance without really committing to making an ambient record. In other words, Papercuts have a sound without a direction or a point, and with little that actually happens, it’s a long listen from start to finish. Perhaps evocative of dark dreams and paranoia, You Can Have What You Want is little else.