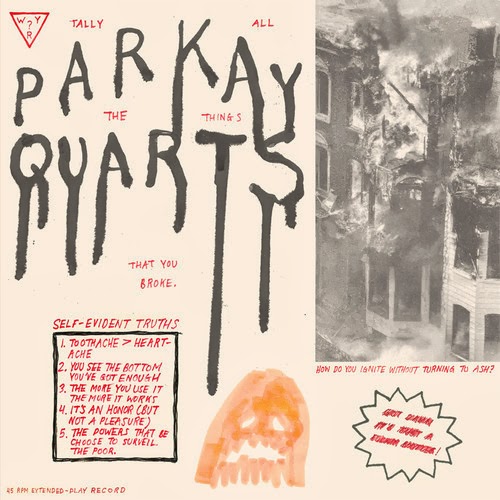 Parquet Courts: Tally All the Things That You Broke EP 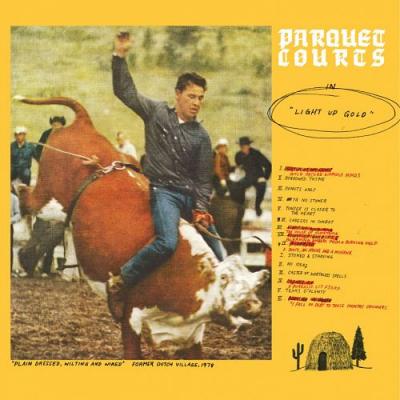 Light Up Gold is the second album by New York upstarts Parquet Courts (though the first, American Specialties, was only released on cassette), released last year digitally on Dull Tools but now available widely on CD and vinyl. So though it’s technically from 2012, we’ll just call it the first great rock record of 2013. Because there’s something about Light Up Gold that feels very fresh and new, despite the litany of comparisons one can rattle off. Parquet Courts have a neat, fast-paced style made for short attention spans; it’s clever but not overly quirky and accomplished without noodling and distorting and puttering around unproductively. In a nutshell, Light Up Gold is the ultimate no filler album—sharp and bright, but also much more interesting than it seems on the surface.

Parquet Courts are yet another Brooklyn band (just when we thought all the Williamsburg practice spaces were booked), but with three quarters of the band hailing from Texas, it’s not just a New York sound they’re working on. Despite the presence of minimal post-punk guitar, there’s also a relaxed, lived-in vibe here that gives Light Up Gold a unique sense of pacing. The songs are short and the drums are fast, but Andrew Savage’s words and Austin Brown’s guitar feel like they’re taking their time, kicking back and not worried about keeping up. The record begins in a tight Modern Lovers-style groove, but becomes more complex and expansive as it progresses, adopting a sound that seems inspired in equal parts by Pavement and the soulful punk of the Minutemen’s D. Boon.

After an extremely catchy beginning run with instant chant-along songs like “Master of My Craft” (“Forget about it!”), “Careers in Combat,” the record’s standout, comes along. It’s simple, with downbeat, twangy guitar and doubled-up spoken vocals, using repetition and a bit of wit to drive home a pretty blunt point about the economy, from “There are no more summer lifeguard jobs / There are no more art museums to guard,” to “There are no more jobs for park rangers / ‘cause there are no bears left to save you from / But there are still careers in combat / My son.” It’s a universally relatable bit of cynicism, not so much a political statement as a succinct and biting reproduction of so many twentysomething bullshit complaint sessions.

“Careers in Combat,” like many of the lyrics on Light Up Gold, trades in the mundane from a wry, occasionally hyperbolic point of view. “N. Dakota,” another Pavement-esque standout, also employs this list-like structure (characteristic of many of the songs on the record) to paint a colorful portrait of an oft-forgotten state: “Train death paintings / Anti-meth murals / Color the ghettos / of North Dakota.” Though New York makes some appearances throughout (most prominently Ridgewood, Queens in the record’s longest and only even remotely jam-y track “Stoned and Starving”), it’s Savage and Brown’s red state background that proves the most fertile ground for observation, as in “Donuts Only”: “As for Texas: Donuts only / (you cannot find bagels here).”

Light Up Gold runs deeper than your average catchy, fun shout-along record because of the way it seamlessly integrates disparate attitudes and influences: New York punk with California indie, interludes about stoners and junk found in a pants pocket (“Yonder is Closer to the Heart”) with nostalgic meditations (the excellent “Borrowed Time”: “I remember the feeling / Of the museless existence / Of the drunk, bored, and listless”). All throughout, the band becomes steadily more sure-footed, a confidence rooted in Savage’s matter-of-fact but warm vocals, and in the disarming way the music seems to charge forward and mosey aimlessly at the same time. Parquet Courts make a good first impression, but even better are the engaging stories and casual shifts in emotion that may take a while to make themselves plain.