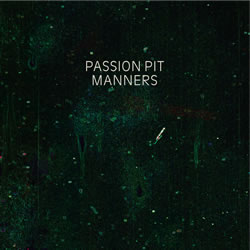 Nostalgia’s a depressing trip, particularly the brand that manifests itself in childhood interests revisited. It’s an ephemeral fix, a little spark that holds enormous appeal for (but certainly not just for) wistful young adults world-round. I doubt I need to recount my friends and I recently watching Darkwing Duck on Youtube to make my point—you get the idea. The idealistic pull is everywhere: it’s why you can’t walk around a campus without seeing a Jem t-shirt, why nerds think gaming piqued with Battletoads, why Labyrinth would be anyone’s favorite movie, and why anybody over the age of nine will enjoy Passion Pit’s Manners.

What better way to capture childhood exuberance and vitality than by employing actual children? Child choirs are the latest irritating trope in indie-rock and -pop, inducing winces and upsetting stomachs like Pop Rocks and Coke, but Passion Pit neatly sidestep accusations of trend-mongering for hit-making gain by utilizing their prepubescent pipes wherever fucking possible. The “HIGHER AND HIGHER AND HIGHER!” kids chant on second track “Little Secrets” grates enough as it is, but when they show up again (already?) on “The Reeling” for its own Infectious Pop Chorus, I’m looking for the stop button and a cold glass of water. Conrad says this record makes his teeth hurt, and, like, seriously: if last year’s Black Kids record was gum drops and lollipops, Manners is a bag of cane sugar and a table spoon.

I could go song by song and come to the same conclusion with pretty much each one: the dedication to this carefree whimsy of youth ultimately stands as the most impressive thing about Passion Pit, and it wears thin quickly. I assume the band had every intention to make this record every bit as sweet as it is, but their tolerance (and, one would imagine, the tolerance of their fans) for the overly saccharine must be exponentially higher than my own. It’s just too damn much. When they get it right and things come together musically—yes, despite the tone of this review, it does happen—the results can be satisfying, but they’re just too rare, too poorly sequenced. The one major highlight, as Chris rightly indicated already, being the band’s runaway single “Sleepyhead,” a delightful and surprisingly potent summation of what their sugar-pop formula could be capable of. Shame, then, that it’s buried at the end of this record’s second half, after so much lesser material.

The danger of nostalgia is that it tends to color judgment and undermine taste, since any sense of objective criticism fails to function in the face of vague memories and a romanticized past. I stress this point again because it’s precisely this romanticized idea of childhood, and all the promise and hope and wide-eyed happiness therein, that informs Manners‘ indulgence in adolescent exuberance and excesses. When these guys (plus kids) shout “Look at me / oh look at me!” on “The Reeling,” it’s telling even if that’s not quite what they mean: Manners gets in your face and demands your attention and care like a loud, needy kid, shouting for you to look at it doing cartwheels and handstands in the yard long after you’ve ran out of patience and interest.