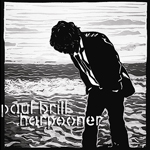 A messy room is a happy room. Paul Brill may not have had this dictum passed on to him in 5th grade like I did, but he’s certainly taken it to heart: If Harpooner was a room, you’d hardly be able to find a patch of floor, much less make your way over to the couch in time for The Office. Thankfully, the collage-pop songwriter’s fourth album is a bit easier to wade through on headphones than my apartment. The stuff of recording geek fantasy, these songs are the hypothetical sound of John Vanderslice and Mount Eerie’s Phil Elverum getting really stoned in Chad VanGaalen’s home studio and jamming on instruments that don’t exist.

As trite as the (“Band” + “Band”) X “Drug” = “Band” equation is, Harpooner is as much a math record as it is a ramshackle one. His tenor bears a resemblance to Vanderslice’s, if a little more drawling; his lyrics deal quite seriously with quirky relationships and whale hunting; his songs are folky, sweet, and very cluttered; if adding this all together sounds good to you, you will enjoy this record. As for the collage, Brill somehow keeps the musical chaos in check just enough to let his songwriting gifts shine through, but it’s the insatiable mess that makes it all happen.

There’s “Consanguine,” where Brill sings for simplicity: “All I want now is the ocean in front me.” Liar. Sounds more like he wants tip-toeing drums, acoustic blips and strewn-about vocal takes. As with many of these songs, it’s too start-stop to be funky. Instead, its halting motion recalls the crunch of boots walking through a precarious landfill. “I Take It Back” takes a finger-paint approach to supporting Brill’s falsetto, smearing ambient guitar notes and acoustic squelches across its canvas. Playing the background soundscapes against the rhythms that infrequently rise to the foreground yield the album’s best material; the unpredictability of the drums on “All You’ll Want” makes the rest of the song even more disorienting, at least until Brill’s melody pierces through. “Paris Is On” is the closest thing the album has to an anthem with its fuzz-rock chorus and power chords, but as the most straightforward song, it’s also probably the least interesting.

Despite outward appearances, the owner of a messy room will probably tell you that he “knows exactly where everything is.” That is, forgetting the sweatshirt I lost last month, and the DVDs I could’ve sworn were on the shelf and … well, regardless, it’s not about knowing where everything is. It’s about knowing where to look. Harpooner is a pretty good place to start.