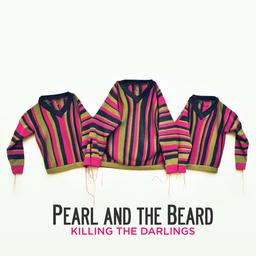 Pearl and the Beard

I’m not positive, but I think it’s around the time someone was playing a Mumford & Sons track and it registered in my head not as some earnest material, but as some ironic appropriation or parody of folk-rock—kind of like Flight of the Conchords—that I fully came to grips with my escalating folk-pop disenchantment. Putting it all out there: I have more or less washed my hands of folk-rock and folk-pop groups of all walks, especially the emotionally liberal, bouncy folk-pop groups. (To finger-point: I namely mean those from Brooklyn.) Each year, I find myself more steeled, paying less and less attention to the sweet-faced, glockenspiel-touting kids playing harmoniums with unfettered glee under bridges.

Had I not so offhandedly downloaded Pearl and the Beard’s Killing the Darlings while distracted, looking up weird-ass antiquated nouns in this Balzac novel (I still don’t know what a “yatogan” is), I don’t doubt that I wouldn’t have downloaded it at all. All double negatives point to: on paper, this isn’t an album I’d come by on my own. Not anymore and not by a longshot. While the cover art sports some trio of unraveling Fresh Prince of Bel Air sweaters (handknit together like a sweater-centipede by one of the bandmates), the band’s press quote clippings froth at the mouth over glockenspiels and constantly flaunt obnoxious descriptors like warm and scrumptious. (C. S. Lewis is doing music reviews now?)

All off-putting elements and words that stand in stark contrast to what I enjoy most about folk, i.e. the rough-handed way of delivering whimsy; the cold splices; the cruelty of “livin’ off the fatta the lan’”—or something. Steeped in hardship, folk in its purest form has the capability of delivering harsh glances at reality and conveying crushing tragedy in unique narrative patterns and repetitious cycles. But Pearl and the Beard and their ilk, these kids are just so fucking happy. Sometimes it works and sometimes it just strikes an insincere note.

Still, New York’s Pearl and the Beard—Jocelyn Mackenzie, Emily Hope Price, and Jeremy Styles—are capable of really emphasizing at crucial points those harsh, dry-as-toast saws of cello and harmonies carved from distressed backporch wooden planks. Theirs is music with the resilient bounce of banjos and occasionally pop-sweet vocal bellowings—but this they pair with brusqueness. On each track they employ diverse structure and technique, successfully blurring the line between folk and pop right across the board.

Opening track “Reverend” is a surprising amalgamation of these virtues, with, about a minute away from the end, the lyrics “I’m a blessed man” catapulting the track into a proper-sounding hillbilly rundown; rampant rolls of banjo and foot stomping to boot. It’s a moment they keep up as cello and handclaps turn over into the second track, accompanied by primarily male vocals repeating, “sweetness”…all the suddenly dashed by a pop outpouring of female vocals at the “I’m drunk on your love” chorus, rattling me loose from all its folk gruffness. I could dig.

But then things get a little tougher to swallow. Sometimes the pop-vocal surges bury what’s nicest about the accompaniment, like in third track “Prodigal Daughter,” a more plinky-profuse track with shallow, choked-back guitar strummings and brisk snares. Those darned vocal surges bury some really pleasantly executed banjo rolls that only pull through at the very end, when everything else finally recedes.

The dialing in of a number of influences—from blues in sparse final track “Black Hole of Calcutta,” to dust bowl era radio croons and chain gang influences in “Douglas Douglass”—can begin to take on a less sincere, musical theater sound. To say nothing of the liberal use of vocal grinds and chain gang choruses taken to such an extreme level of early African-American mimicry pouring over slow bellows of “it’s a long way down” that it honestly makes me uncomfortable.

That said: I didn’t come into Killing the Darling by way of crap press clippings and material. And it’s a good thing I didn’t. I don’t like Pearl and the Beard’s album art, I don’t care about their Sweater Centipede (knitting is for serious suckers), and I sure as fuck don’t like their scrumptiousness. If anything, it’s their dry tones, their fascinating amalgamation of folk elements, boosting them above their contemporaries. At least as far as sounding a fucklot like folk I like listening to, for the reasons I like listening to it.