1. Sermon on the Subject of Death, Part One 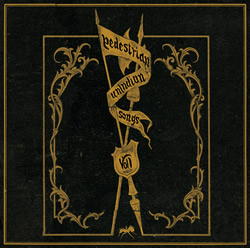 Pedestrian was the Anticon ghostwriter, flitting beneath the floorboards of the house that white boy guilt built, the family of wordy word activists calling on his spirit as a muse. Now, Pedestrian screams out of the shadows, rears his pale form to the rafters and exclaims, “Wheeze!” His lips released the sound of an aging aesthetic dying to be reborn, and many were sore afraid. In the inevitable story of “The Rise and Fall of Anticon,” Volume One: unIndian Songs sounds terrifyingly like something just past the hump.

“Sermon on the Subject of Death, Part One” is an introduction that’s about as appealing as its title and as threatening as its “Part One” addendum. Yes, there is a “Part Two,” and, yes, it is a waste of a minute and half. The striking impression left by first song proper “O Hosanna”: Anticon production seems on a conscious quest to devolve into a more lo-fi form of life than the progressive polish of Sole’s Selling Live Water. The elements are interesting but subdued in an oddly muted mix and a sonic haze --- as if to defy those who thought a couple years ago that the collective was getting ready to venture into the realm of, gasp, clarity.

The first track of “Lifelong Liquidation Sale” incites excitement with its harried guitar, only to have its intensity cut short by the next track’s boring keyboard washes and drums that sound like they are coming from ten rooms over. Cue off-key singing and make truth out of all the Anticon stereotypes. More sermons on death and a cheap “Jukie Skate Rock” parody beat with helium vocals on the hook (“O Silent Bed”) could test the most patient of the art-hop devout. Pedestrian’s rapping is an inessential and generic addition to the collective’s pantheon, his no-technique flow and lyrical ejaculations coming off like the inexperienced child of a three way between the already established Why, Alias and Sole.

Light-hearted, accessible, out-of-place “The Dead of a Day” wanders into the dark shelter from a Rondo Bros. Hawaiian storm and is greeted by the Do the Right Thing boom-box bounce of “Arrest the President.” Get down, Rosie Perez. The problem is that album ADD renders likable material a morass of colors that clash more violently than, well, the wardrobe of Do the Right Thing. With its minute of redneck twang and foot-stomp drums, “The History Channel” simply supplies more evidence of that.

“Anticon” saves face like a cosmetic surgeon as it throws horns over a break with Mecca and the Soul Brother flair before transforming into a fine example of that post-something-or-other that the collective patents. Skipping over the doomed-to-bore “Field Reports from the Financial District,” Pedestrian finishes solidly with the Fiery Furnaces riff-hop of “The Toss & Turn,” the Oaklandazulasylum prettiness of “Jane 2: Electric Boogaloo,” and the cool blue bump of “Blind Dates.”

The mixture doesn’t stick together, though, and Volume One: unIndian Songs leaves the bitter taste of disassociation. Selling Live Water seemed a sure-fire sign that Anticon as a label was just a year or two shy of releasing the masterpiece that truly summed up the collective’s potential and talent (Personal Journals doesn’t really count due to Sage’s non-member status). However, at this point, followers may be wary of their favorite anti-conformists stumbling into the sort of slip that’s plagued Def Jux for the past couple years. On “The Dead of a Day,” Pedestrian remarks with a rather sad accuracy: “Nah, you all do songs / I’m only snapping my fingers like I forgot something.”