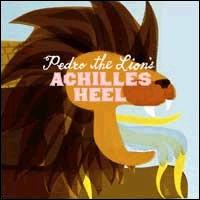 Achilles Heel is Pedro The Lion’s redeeming follow up to 2002’s not-that-impressive Control. The success of Winners Never Quit, the critically acclaimed concept album about a morally corrupt politician apparently went straight to David Bazan’s ego, as he developed a do no evil pretense, and fucked up royally with Control. The main problem with Control is that good lyrics alone can’t make an album work, and Bazan neglected to pay attention to the music. I would say that his intentions were purely cathartic with Control, but that would mean that the lyrics were the equivalent of vocal masturbation, or some equally annoying form of self indulgence.

But now that the crippling pretension of Control is an acknowledged mistake of the past, Pedro The Lion has (as of May 25th) released the album of their career. At the surface, Achilles Heel is a set of simply structured lofi rock tunes, not too long, but not too short, with the music in the back and folky vocals in the front. But a closer look will reveal Steve Bazan’s incredible talent as a lyricist. Each song is either a short story, an expounded idea, or a few sentences elaborating on a random emotion in an unsuperficial way.

Bazan has a unique style of painting lyrical picture after picture of situations and characters, and the best example of his ability, I think, is “Discretion.” The song starts out with some dreamy, reverberated guitar, and Bazan sets the scene for the story of a farmer whose son paid a hit man to kill him. The guitar picks up, and the story continues to explain that the farmer found his dead son at the same time that the killer was driving and thinking about his “recent deviation from the plan.” But it’s not revealed until the closing seconds of the song that the hit man decided to kill the “asshole son,” and spared the farmer’s life.

However monotonous a lot of other songwriters may be in their storytelling, Bazan is far from out of material to write about. He can write very elaborately, like in “Discretion,” or simply, with a “hey, don’t be a dick” message. The slowcore jam rock of “Keep Swinging,” demonstrates this. Some dirty, overdriven, lo-fi blues guitar (damn, that’s adjectivey!) sets the melody for a story about how people in irrational states of mind can cause problems for other people by throwing self-deprecating temper tantrums. It’s about what I assume is a personal friend of Bazan’s who gets really drunk in Chicago, trashes a hotel room in a fit of self-directed drunken rage, and leaves the mess for the maid to clean.

Bazan meticulously insinuates the thoughts and actions of his songs’ characters very slowly until things are finally clear in the closing words of each song. It’s almost as if he’s inviting you into his mind for a few minutes at a time to catch a glimpse of the sometimes fictional, sometimes factual characters in Pedro The Lion’s songs, each of which act out the stories and fill in the blanks as more details are subtly unveiled.

Although Steve Bazan is deeply religious, he refrains from preaching and doesn’t come across with the standard “holier than thou” attitude that makes most Christian bands suck -- especially DC Talk, or, to the other extreme, Creed. He really surprised me with the lines “you were too busy steering the conversation toward the lord/ To hear the voice of the spirit begging you to shut the fuck up” in “Foregone Conclusions.” The entire album is full of subtle messages of common courtesy and other attacks on disrespectful behavior, which, as an American tired of being run off the road by SUVs and tailgated by white, suburban homies in pseudo race cars, probably made Achilles Heel appeal to me even more than it would have if I didn’t live in a gimme gimme gimme country. (Sweet Canada, if only I could afford to move to one of your deciduous cites.)

The music may not be that technical or exceptionally original, but Pedro The Lion has never been anything but an indie rock band with a stripped-down approach. I’m not saying that it’s bad music; it works very well with what they’re doing.

Since Steve Bazan wrote almost everything in the past, he kind of was the band. This was not the case with Achilles Heel. I think the reason for his collaboration with other musicians was because he took the disappointment of his previous effort as a wake up call to stop take taking himself so seriously, lighten up a little, and have a little fun with some friends. The opening track of an earlier effort (which is also worth checking out), The Only Reason I Feel Secure, is called “Criticism As Inspiration.” I think that David Bazan has no problem taking his own advice, and it shows on this excellent album.