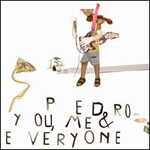 London's James Rutledge a.k.a. Pedro loves himself some jazz. He's an electronica producer enamored with things "warm" and "organic" or with stuff that just vibes for miles. His appreciation reads like Kerouac. It's there in all his interviews, where you can also find him emanating palpable rage any time you see the interviewer mention "folktronica" -- which is a word that's popped up a lot around Rutledge's earlier work. In a sense You, Me & Everyone feels radically reactionary to this pigeonholing: the drums often come unhinged, horn samples wriggle all over the place, and electronics thickly swarm through these densely layered cut 'n paste compositions like locusts leaving shrubbery in shreds. But, then, that still sounds a bit like Four Tet, who gets called "folktronica," too. If there's a major difference, Rutledge's music carries a big knife in its teeth; this is aggressive shit, steaming with a no-holds-barred fervor absent in Four Tet's work (though this record is neither as refined as Dialogue [1999] nor as pretty as Rounds [2003]). But I think my basic appreciation for both artists takes place on the same level of understanding: this record represents a studious outsider's insular vision of jazz, reflecting how jazz encourages the listener's brain to intently parse and even melodicize musical improvisation, and suggesting how digital editing redefines what musical improvisation might even mean in our millenium.

Far from "free," many of the sweet melodies here are solidly pinned by Rutledge's torpid bass tones, even as drums go tumbling off a precipice or synthetics gopher up the rolling terrain. The title track peaks into a squall of horns and percussive thunderclaps while the bass just keeps slowly meting out the foundation; the very next track explores the same dynamic in sporadic bursts before returning to a lighthouse loop and music box chimes that radiate off the low-end. So those fat bass pulses are important, for they ensure that no matter how hyperactive Rutledge gets with whatever's cooking up top, each track gives off a steady slow-burn from below. Which means that for all its sonic explosiveness, You, Me & Everyone is never anything less (and sometimes nothing more) than pleasant. And that's exactly the sort of comment that could piss Rutledge off, eventually causing him to put out a record that sounds like Supersilent.

That'd be a shame, for sure, because 1) the singular awesomeness of Supersilent needs no imitators and 2) because Rutledge's ambition could hurl him past what should be his focus -- bringing the jams. When Rutledge puts a white-knuckle grip on extreme excess, he grabs the distinction he desires. "There Will Always Be More"? The track's practically a whispered threat to itself, eerie key lines and electronic pings splitting open for a moment into a noise jazz maelstrom before a fragment of the cold melody faintly reinstates itself -- at one minute long it works because it's so self-contained. Four minute "Spools" would have benefited from the same concision, its structure crumbling under Rutledge's drive to tear at his fabric, to keep things from sounding too "composed." Most of You, Me & Everyone strikes a nice balance between the unraveled "Spools" and the deep-rooted tracks like "Hope is a Happiness" and "Outro (Awake)," but none of the rest does it quite so perfectly and wholly as the album's Song 2.

"I Am Keeping Up" is the incendiary record highlight because it's the sound of an unstoppable groove fighting against itself; synth arpeggios and a bass anchor fall in and out, trying and only mostly succeeding in keeping the raucous percussion and brass fireworks from breaking the atmosphere and fizzing to nothing in outer space. With this track Rutledge throws down the gauntlet to himself, capturing a contiguous intensity that must be his dream: computer keyboard in place of an instrument's keys, eyes closed, and letting the mind -- not the mouth -- just blow.