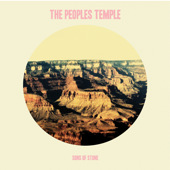 As the Nuggets series demonstrates, the 1960s was a time when rock music was, in some ways, at its most democratic, particularly in the US and Britain—as though, in even the tiniest towns, great sounds were curated all the time in garages and backyards. The richness of the resulting genre, appropriately deemed garage rock, is a byproduct of just how new and fresh rock seemed at the time, especially when the single stood above all else and there was little emphasis on making a grand statement or following an ambitious concept. Garage rock, before it ventured out of its hovel to transform into psychedelia or punk, is at its roots supposed to be tossed-off and ephemeral; no wonder it’s difficult for contemporary bands to work within this now-nostalgia-based genre, to emphatically not craft something meaningful or complex, to not just relent, admitting it’s all been done before, and better.

Which brings us to the People’s Temple, a throwback band fascinated with all of the above. Quaintly, they’re composed of two pairs of brothers, the Youngs and the Szygedys, and hail from the charmingly un-hip city of Lansing, Michigan, though they fit in well with the recent garage rock revival raging in San Francisco courtesy of groups like the Fresh & Onlys and Thee Oh Sees. The People’s Temple’s debut Sons of Stone is fun and energetic, which almost feels like a given, but unlike their kin the Fresh & Onlys (who have evolved over the course of their short career), the Temple haven’t yet grown beyond their influences. Sons of Stone plays a bit like live show by a Nuggets-devoted cover band, which would be totally awesome if you were there, but is mainly pleasant, with a few jolts of promise, if you’re not.

At fourteen tracks, Sons of Stone feels long, due mostly to the songs’—though tightly composed and high-energy—homogenous nature. “Sons of Stone” starts swaggeringly, offering a great lead as singer William Young growls like early Jagger, “Would you even care if I died?” A persistent annoyance throughout the first half of the record, however, is the muffled effect on the vocals. I get that the point is to be ragged—it would be weird otherwise—but in this particular case they sound thoroughly engineered, like the rest of the music, to imitate every early-Stones, 1960s garage rock trope. Not only does it give the impression that the band is trying too hard to nail that vintage aesthetic, it deprives these songs of a hearty sense of urgency. Still, the first half of Sons of Stone is solid enough, in a non-committal sort of way, particularly the bouncy, Small Faces-esque “Where You Gonna Go?”

While it doesn’t have much in the way of momentum, the record offers a nice side A/B turnover with the highlight track “Axe Man.” Following the noodle-y, meandering “Sons of Stone Revisited,” “Axe Man” is a great gasp of immediacy, blending that well-tread mid-century purpose with a generous helping of ’80s post-punk intensity. Likewise, Young’s voice takes on a bruising, Ian McCullough-esque quality. “Axe Man” sets a welcome precedent: the second half of Sons of Stone is more raucous and varied than its predecessor, which brings us back to how totally this record could represent a live set, one where the band gets the slightly boring, mid-tempo numbers (“Led as One,” “Visions of the Sun”) out of the way while the crowd’s ordering drinks, reserving the badass rockers (“Keeper [of Souls],” “Stick Around”) for when the crowd’s good and drunk.

Sons of Stone ends on a high note, whipping out the creepy stalker tune “Never Really (Saw Me Comin’ Round)” and the dark, edgy “The Surf.” The former rests uneasily on lush organ and tambourine, as if the band, less concerned with pulling out the stops, is finally getting comfortable. Somewhat: “The Surf” is truly goosebump-inducing, a slow-down surf rock bass riff churning menacingly beneath sighs and whispered backing vocals. Most promising about “The Surf” is its ability to manipulate a pre-existing genre rather than simply replicate it. This is surf rock only in a nightmare; our feet are trapped in quicksand, nothing comes out when we scream. It’s the record’s best song, an indication that the People’s Temple, if they keep at it, will find their own way—and with that, freedom from their long, long past.