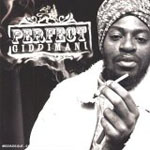 We’ve all had weird and exasperating experiences at the border, but Perfect’s dissection of his inability to get a visa for the US in “Amerimaka”—yes, based on his race, and the assumption that he would rather live in the US than Jamaica—is just depressing. Reverse the route, though, and he’s perfecting the role of Jamaican cultural ambassador; this Hand Cart Bwoy is going to open up the country for everybody and take us to the marketplace. It’s not the lobby of a posh resort where they hand you lobsters (not I-tal) and tell you to scuba dive; it’s not Spring Break, sorry, but he’s going to show you Old Spring Brook instead, and he’s got a point. Spring Break is just an escape from what isn’t a break: Amerimaka. Which, of course, is Babylon, and Giddimani believes that you can punch out on your “Tyme” card from that life and visit a better Jamaica that tourists never actually see, because the marketplace is where the black people are. The marketplace also is and isn’t Jamaica anyway, because it is white and black, and between the queues of his desegregated fantasy Perfect says he’s juggling “pepper and papchoy,” but he’s also weaving racial politics, herb, postcolonialism, and safety from terrorism—there are no planes crashing into buildings in Jamaica, he notes, because everybody is just relaxing and smoking. Sometimes letting your defenses down is the best way to avoid conflict.

“Tyme” realizes the other side, too: Jamaicans have been exploited, and Perfect advises his fellow black men and women to “Keep climbing / Don’t you drop / Look forward / Never look back.” It’s not a conflict, here—you can be forceful without being violent, you can have pride without hubris—but it does point to the central struggle of postcolonial relations, on both sides: how do you protect your own culture while demanding that others loosen their grip on theirs? But it’s the music that makes this vicious pairing so brilliant: “Marketplace” is actually the more violent of the two tracks even as it advises everybody to relax, and “Tyme” trills along warmly as it outlines the revolution. In the middle, grinning through rings of smoke, is Greg Rose, offering Rastafarianism as a solution, somehow updating and getting back to the roots of reggae and dancehall at the same time, and generally throwing around melodies like he stumbled into a vault of Marley and Cliff outtakes and smuggled them out in his vegetable cart.

A cart which may or may not be fictional. Perfect is and is playing the Hand Cart Bwoy, handing out invitations labeled “More Smoking” and almost eclipsing two other glad-handing tricksters I can think of in his ability to construct an ideology around drugs. And, surprise, he’s pointing to that pose, too: on “Amerimaka” he notes, “I’m not Tupac,” right before launching into a reggae beat on “8 Gangsters” with a synth that sounds more Dre than Dre has sounded since “California.” The sleazy L.A. Law horns in the background don’t negate the intoxicating cyclics of the song—wah guitar and Perfect’s voice circle as he sings “Eight gangsters want to run the world / Want to control all the gold and the oil and the diamond and the pearl.” G8 is evil, which, yeah, but it gets even more evil when you think about it as Perfect has portrayed it: eight guys with canes and cigars dividing up the world like work territory. Possibly with meatballs involved, given how meaty that bass is.

Perfect is writing crimes on a wall, but he’s also driving to the root of the logic of what crimes are. Defense of herb is paramount, but he contextualizes it…um…perfectly: on the enchanting “All I’ve Got” he sings, “My herbs is all I’ve got,” and that “I ain’t got no bomb nor guns nor weapons of destruction,” so “what you looking at / Squadie?” Perfect likely won’t get to see Germany try Rumsfeld, but it’s the same basic idea: in the scheme of things, he doesn’t think his herbs are all that bad. What is bad is the reasons for his arrest—“Is it because I’m black?”—and that legacy of Jamaican racial inequality radiates throughout the album. It’s a border the (presumably white) police have trouble crossing, and between this and his dissection of G8’s world partitioning (a notion W. would surely chalk up to a youthful enthusiasm for cartography) borders are incredibly powerful implicit metaphors throughout. Giddimani itself is apparently a world Perfect created, and the borders are open, because the world we actually live in is messed up. But I think these are parallel universes, and what is fascinating is the way he sets up borders as problems and solutions, and that crossing one way will reverse the other.

Take the wicked single, “Hand Cart Bwoy.” Over nauseously giddy horns and rollicking roots, the song retells the old story—rich uptown girl falls in love with working class boy. But unlike Romeo and Juliet (or Althea and Donna), nobody gets hurt here: “She get whole heap a love a joy from the hand cart bwoy / A the same little bobo youth wha name Fitzroy.” The story ends with love at first sight, and Perfect’s dénouement is simple: “Push my cart and dance and sing / Oh what a loving, caring woman you are.” Class is a border here, but the intimate relationship forged across it is far easier to traverse because everybody is open. “Wingless Earth Angel” continues the theme, replacing the glistening horns of the former with a deep, thrumming dub workout and a beautiful, sighing melody. “Love Has Found Its Way” and “Cry Me A River”—about coming together and falling apart respectively—also speak to the power of relationships, and placed together create a disorientating picture: processes and moods of love, defined by Marvin-Gaye-motion reggae (on “Love,” the guitar lick sounds like late-period Genesis Mike Rutherford) and a happier “No Woman No Cry.” “For Sure,” with its shaft-of-light melody, takes the border more literally; another snarky horn section blurts while Perfect hesitates in a doorframe—should he enter or leave? But check the internal logic: “I can’t take no more, I’m going through the door / Can’t go through what I’ve been through before.” He’s stuck, but he’s still looking for a way out that doesn’t involve violence, and for the most part, the album advises pacifism, except when he’s waiting for his visa in “Amerimaka”: “I want to break the glass / and squeeze your blasted neck.” Customs is that fucking bad.

It’s just a thought, though, and “Rasta Rebel,” a toast, is more clinical in dealing Perfect’s grievances. It’s a great roots track, all squiggly guitar lines and thick piano bounces, topped with Perfect’s Rastafarian ideology, some nice syncopations on “I and I” (the Rasta greeting that signals we are all equal), and lovely vocal harmonies. “Sersi-T” also falls into this thick roots tradition, preaching “No man never better than no man” over bubbling organs, piano, and call and response lists of all the people who are “no better than no man.” Both songs flip the lighter tone displayed previously on the album, and “Sersi-T” especially displays an impressive vocal skill. He’s got range, too: on “For Ma Family” Perfect’s voice seems to loose an octave as he sings about his own past. “Little Old Lady” follows, ending the album with a splurge of acoustic guitars and echoing kicks—a haunting ending that again flips the style switch.

The two outright dancehall tracks are back to back. “Nuh Badda Mi” is the more straightforward riddim, but while the lyrics revisit “All I’ve Got,” the song’s thin beat isn’t nearly as compelling as “Hit Dem,” which follows. A monster of a track, as large as it is sparse, hand claps and piano clip over marching drums as Perfect throws his most guttural tones full tilt over top. The programming leaves all sorts of breaks and the whole track falters like a record needle scratched across the deck. It’s one of the finest club tracks this year, and on an album that is mostly political roots tracks, that’s pretty awesome. It’s a toss up between this and “Black Marcus” for my favorite track; the prettiest song here is his ode to Marcus Garvey, where Perfect performs the Rastafarian goal of education about black history. While his first two verses are detailed analyses of Garvey’s life, it’s his repetition of “St. Ann’s Bay” in the third verse that fascinates in its boiling of the history down to an idea. Garvey is an important symbol, of course: he did advise the biggest border crossing of all, and the homage here fits that stature.

The politics are fascinating throughout, but equally staggering is the sheer variety of (good) tracks here. Perfect gets away with having “Hit Dem,” “Hand Cart Bwoy,” “Black Marcus,” and “Little Old Lady” on the same album because he’s paid attention to pacing and cohesiveness. But he also gets away with it because he’s really damn good. You can love your Sean Paul singles (and I’m there with you), but why not do what Perfect has done? Hit those highs but replace the chafe with this caliber of material. Perfect’s overall compositional style may echo the pop mechanics of Toots, Cliff, and the Wailers, but he’s got Max Romeo’s dramatic flair and the attitude of Big Youth and U-Roy to pull him through on both ends (and what more fitting way to deal with border politics than to constantly traverse borders within reggae itself?). As long as you don’t think contemporary reggae should be all dancehall all the time, this is a must have.