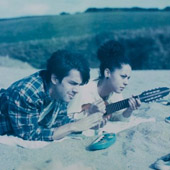 With Peter Lyon’s ’80s Casio synth-pop loops and Kerry Leatham’s soulful, buxom vocals—fantastically similar to Mica Levi’s both in character and pushy British accent—Peter and Kerry is the sum of two, bright- and button-eyed parts, each artist having had their fingers in solo endeavors and multiple collaborative projects, respectively, care of the highly incestuous Tape Club Records. And whether Lyons and Leatham keep up their Peter and Kerry collaboration after the almost impromptu Clothes, Friends, Photos EP, that remains to be seen.

Genial and sweet-tempered, Clothes, Friends, Photos is a six-track EP with five plenty-nice tracks crammed up behind an opener that, while increasingly catchy, stands primarily to posit Lyons as champion of seriously adorable dude vocals and cute-clever turns of lyric like “How can I really say how I feel, when I swore not to say I love you in song?” While lines like this and “’Cause I feel like I’m Ted Hughes and you’re Sylvia” barely eek past my discriminations, he finds small ways to recover, acquire balance, and evade the unappealingly trite. Recorded for the most part in Lyon’s own unkempt bedroom in London, this is a jaunty, banjo-pluck- and tambourine-spank-spangled album forged of two fresh and unabashedly lovable songwriters who tiptoe briskly—and deftly—that line I’ve drawn between twee-ish content that riles and twee-ish content that simply warms the cockles.

Another song like those quoted might’ve put me off the album, but it’s the only one of its ilk, and so, at the end of the day (or EP) I am happy enough—even a little titillated—to let Lyons’ adorable-dude flag fly for a track. And they fly, those prominent and plying vocals, persevering from beginning to end, at a determined clip, through a song gushing with eclectic smatterings (like tambourine and xylophonic chimes, which hinge on a sparse drive of static guitar chords; like the whimsical bedroom indie-rock ornaments that march in determined stride with Lyons’ voice, accumulating a lush following of supporting jingles, janglings, percussive clicks, and claps.) With a plethora of slowly building eruptions, those “well I put on love songs and you put on breakup songs” turn into something that’s by far more sweet than cloying, the latter, surprisingly, never materializing.

A refreshing contrast, “Half Empty” is all bare strums of ukulele and a voice that so surprisingly smacks of a bluesy Micachu and the Shapes I had to check to make sure my “new albums” playlist wasn’t on shuffle. It’s a fittingly summery track with Jack Johnson-like, siesta-time warmth; small Casio blips scuttle underneath. It isn’t until the halfway mark, “Oh, No,” that like a thin layer of adhesive between halves, Leatham’s and Lyons’ voices coincide for barely more than half a minute. A brief, Postal Service-esque Casio is put to a 50s beat over the simple repetition of collaborative vocals: “I don’t know what I’ve done, I don’t know anymore.” It opens the album to becoming more than just a split EP, and the way their voices shadow each other crawls out from the background of layered vocals to bubble up more and more prominently in the following tracks.

“The Shadows,” an upbeat, metronomic, swaying ballad, does away with the ukulele and pairs some seriously bouncy banjo rolls and pert tambourine chings with all the endearing minutiae of previous songs. Equal parts somber and resilient, it leaves long expanses for extended bars of banjo and ambiance, building up a pause—a pause, before Leatham’s vocals push in with dusky pout. Like in the opening track, Leatham isn’t left alone with her perseverance, soon joined by a crowded pub’s worth of raucous, chummy dudes chirruping in.

Due to being recorded in a bedroom, or perhaps due to the instrument itself, fifth track “Knees” is flush with piano that sounds more liquid than solid, chords swimming somehow inside themselves. And in a final thrust of electronic savvy, the video game noises amp up and the album shifts gears for “Crash and Burn.” Here lies the deepest, most ribcage-vibrating 80s beats on the album: playful clap-tracks and a catchy hook of “I want my memory back / I’m tired of drinking it away-eee” courtesy of Letham. It’s a bedroom mantra following the thread of resolution from the opening track to its closing.

While highly cuddlesome, Clothes, Friends, Photos is a deceptively palatable EP. My cockles are left toasty. Maybe it’s the resolute coloring that keeps the album from slipping off into the trite, but it never loses face, fades from surprise, or lets itself slip over into cliché. What should war with its own cuteness, doesn’t; what should have me struggling with my twee pitfalls, doesn’t. Unless it’s some fleeting and unconscious phase of vernal optimism, I am simply, very easily, won over for the Peter and Kerry duration—however long that winds up being.