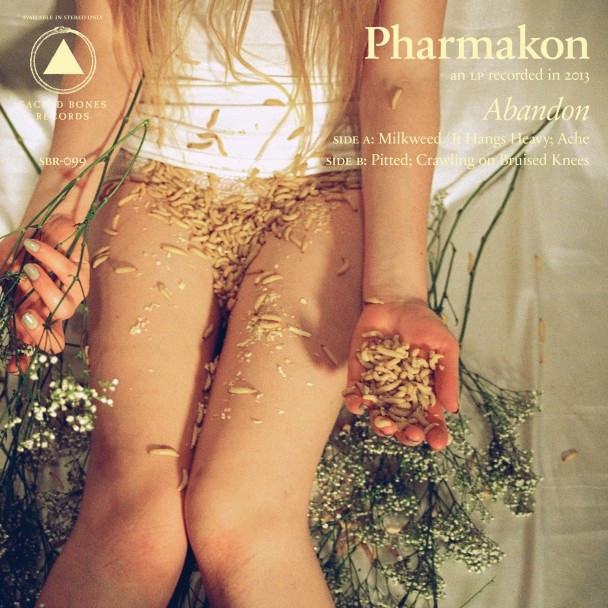 It struck me recently while listening to Abandon, the first widely distributed record by Margaret Chardiet’s Pharmakon project, that one of the keys to grappling with noise as an experience is to consider the inevitably of the genre as a concept. Ever since punk staked an ideological claim on the idea of reducing music to its base elements, musicians have been on a seemingly never-ending quest to locate the complexity in the elemental, the beauty in the horrific, and the transcendent in the forsaken. In makes sense, then, that a scream, the most guttural and cathartic of human actions, would announce one of the year’s most bracing records, one that brings many of experimental music’s recent fascinations to a new, logical plateau.

In an instant we’re forced not just face-to-face with Chardiet, but inside her psyche itself, sent careening from whatever mundane daily activity we’re toiling away at to ground zero of her psychological exorcism. It lasts but a handful of seconds, but the emotional resonance of that scream ripples forth across Abandon’s brief but intense twenty-seven minute runtime. Throughout, Chardiet wields her power electronics like a weapon or, perhaps more appropriately, like a defense mechanism. Her vocals, severe yet sincere, imply further confrontation, only this time with her own insecurities as often as outside injustice. In this sense, Abandon can play like a kind of spiritual sister to Jenny Hval’s recent work. But whereas Viscera (2011) and Innocence Is Kinky (2013) belie a very specific concern with the psycho-sexual, Abandon seems to consider matters of the flesh as just another grotesque impulse hindering our emotional evolution.

Which isn’t to say that Chardiet doesn’t revel in the grotesquerie. Opener “Milkweed / It Hangs Heavy” is all swarming digital detritus, found-sound percussion, and throbbing bass pulsations, Chardiet burrowing amidst the destruction only to emerge from the maelstrom with hair-raising shrieks as the track takes on a metronomic forward motion. “Ache” proceeds more erratically, its industrial rhythmic stabs providing our only possible footing as Chardiet sends her vocals alternately wailing and echoing across the track’s post-apocalyptic divide. “Pitted” turns further inward, with lacerating beats and a hypnotizing layer of drone creating a cushion of tension as Chardiet intones a wordless prayer as the ashes of the monastery rain sacrificial sulfur at her feet. Finally there’s “Crawling on Bruised Knees,” which, amongst these tracks, proceeds almost linearly, its four-note percussive stride blanketed by short-circuiting electronics and Chardiet’s manipulated, demonic incantations.

Together these four pieces create a single, near-breathless listening experience, robust enough to envelop but varied enough to leave you both craving and curious for more. Abandon’s success lies in just such juxtapositions. Chardiet couches beauty in brutality with disarming simplicity, chiseling her compositions to only the most essential components in an effort at delivering a similarly earnest call for sanctification. And yet there is nothing mannered or predetermined about Abandon; like the best of its genre, it charts an inexorable path, attaining a kind of purity in the process. The means by which Chardiet arrives at such a state may be primitive, her exasperated wail an act of dire compulsion, but the results are about as honest a statement on the human condition as 2013 has yet given us.