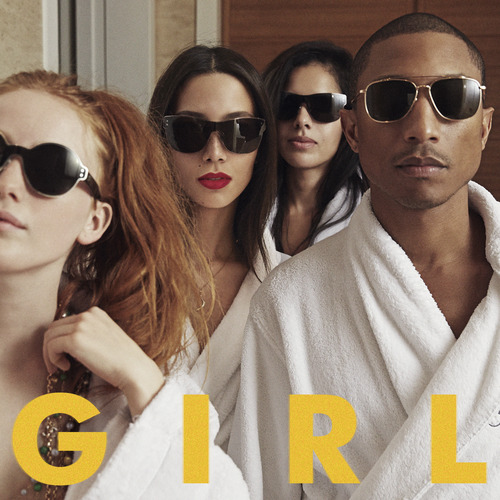 “Just because it’s the middle of the night, that don’t mean I won’t hunt you down,” goes an actual line off the new Pharrell album. With Pharrell’s complicity in the insatiable vortex of awfulness that was the “Blurred Lines” controversy, you’d think that such a vile rehash of predatory, misogynistic rhetoric would at least warrant a thinkpiece or two. But, despite a tremor concerning Pharrell’s supposed fetishization of black women on G I R L, the feminist backlash to the album has been comparatively quiet. Perhaps this is because Pharrell was never the real villain behind “Blurred Lines”; after all, Robin Thicke was the one strutting around in sharp suits like a douchier Christian Grey, repeatedly expressing how sure he was the subject to whom he was singing unconsciously wanted his cock. Compared to him, Pharrell was just the guy who created that inescapable beat going “woo!” in the background. Still, even though Pharrell continues to insist there’s nothing objectifying about “Blurred Lines,” he is pushing G I R L as his declaration of “no, really, I LOVE women.” This manifests in Pharrell spending the whole record admiring female subjects and pledging them his respect (though make no mistake: he is super-interested in sex). On the “Blurred Lines” scale of offensiveness, G I R L is more “You the hottest bitch in this place!” than “I’ll give you something big enough to tear your ass in two,” but perhaps another, more prevalent reason for the silence concerning the success or lack thereof of the pop star’s quasi-feminist rebranding is more simple: G I R L isn’t very good.

Oh sure, it’s very okay. The man’s efficacy as a pop-craftsman is largely unmatched, and G I R L has its quota of smashes. The shimmy-goading “Happy,” the orchestral-disco sequel to his Daft Punk collabs “Gust of Wind,” and the effortlessly sleek “Marilyn Monroe” are all certified gold, tracks calculated for maximum accessibility that only the furthest-gone cynics could deny. On the whole, though, G I R L is a glitzy, sugar-coated rehash of its massively successful pop peers The 20/20 Experience (2013) and Random Access Memories (2013), Pharrell reveling in an excessively decadent pop sound and neutering it of any bite, the result being a largely forgettable record that sounds like it cost a lot of money to make.

So it goes for an album with a world-domination endgame? Columbia Records are quoted saying “we are preparing to launch Pharrell as a global solo superstar in 2014,” which sounds like it could be roughly translated to “we are pouring a shitload of money into this, and he better not fuck it up.” That at least would explain why there’s nothing one could even begin to qualify as a truly offensive fuckup on G I R L. Everything about it is good times, women, and positivity to the extreme. There are no soul-baring ballads, no instrumentation that could qualify as remotely odd. One imagines that a guest list as impressive Justin Timberlake, Miley Cyrus, Daft Punk, JoJo, Alicia Keys, and Hans Zimmer demands astronomical amounts of cash, and that it would only follow for G I R L to be inescapably wedded to the moneymaking pop-formula Pharrell’s popularized through his entire career. Remember how big Justin Timberlake’s “Like I Love You” was? You will when you hear “Gush.” How about when the Neptunes were the edgy, alternative kings of early millenium pop? Not so much when you hear their turd of a Miley Cyrus-featuring contribution.

To be clear, the issue with G I R L is not just that it’s mega-well-funded, but that it, like a gazillion-dollar blockbuster film, bears the weight of being too-big-to-fail, which in this case, translates into a monotonous journey of uptempo, tepid jams and slightly-less uptempo, even-more-tepid clunkers. The worst of the latter is “Lost Queen,” which bizarrely attempts to quote Paul Simon’s Graceland (1986) by taking Ladysmith Black Mambazo’s iconic scooped-“hmmmm” harmony and turning it into a robotic hum, like a printer warming up. Mostly, however, the mistakes of G I R L are those of missed potential. The Justin Timberlake track is mediocre yet weirdly urgent, as if it were desperately trying to find one hook that actually sticks. “Hunter,” on top of being generally gross, employs a guitar-for-beginners lick played ad nauseum. “Know Who You Are,” which early supporters of Pharrell’s feminism point to in his defense, is a slightly-reggae tune aggravatingly light on soul. Its most feminist line, sung by Alicia Keys, is a series of platitudes that amounts to little more than ever-bankable girl-power fodder: “Say your name, enclave, to live life, on the edge / Want you to know, I see, the power, is in me / No more, acquiesce, standin’ up, with no stress / Will do, what I need, ‘til every woman on the Earth is free.”

There isn’t any argument over Pharrell’s character on G I R L because it has no character. It is an unchallenging restatement of the status quo, a filtered expression of major-label pop’s idea of political correctness, which is general pro-female empowerment, so long as women continue to gratefully be mere vessels for ass. Beyoncé (2013) came out too late in the game for the production of G I R L, for if Pharrell truly wanted to nick a mainstream pop smash with a feminist bend, he would’ve had the perfect mark: something dangerous, personal, aesthetically interesting, and uncompromising. G I R L is safe, universal, and unforgivably dull. It should be a huge hit.